It was a special moment under the Friday night lights for two Texas high schools.

The Lubbock High Westerners and the Andrews Mustangs ended the football game with a moment both teams will never forget, allowing a senior with special needs to get the final tackle.

However, the play never would have happened if it wasn't initiated by the opposing coach. 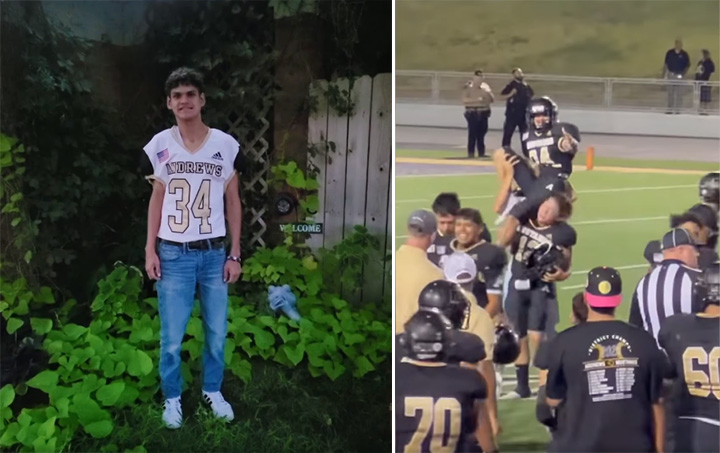 Evan Sparks has played football for a couple of years now, mostly on the junior varsity team. He hadn't had the chance to make a big play in a Mustangs varsity game yet, until Friday night. The Mustangs were up 64-14 over Lubbock High with only seconds left on the scoreboard. The student section thought it was the perfect moment to let Sparks shine, yelling 'We want Sparky, We want Sparky.'

Lubbock High Head Football Coach Juan Rodriguez heard what was happening, and knew this was the perfect opportunity for a teaching moment.

"There are things outside of football, sometimes there are a lot more important things that we need to focus on," Rodriguez said.

Andrews Head Coach Tom Harvey says the next thing he knew, Rodriguez was calling a timeout.

Harvey sent Sparks onto the field and magic happened. Westerner Sean Briceno ran to his side and Sparks landed the big tackle to end the game.

"Honestly, nervous and shocked that I was able to go out and make that tackle. I mean, big win for us, especially during homecoming. It was amazing," Sparks said.

Sparks has one lung, severe scoliosis, neuropathy, gets his nutrients through a feeding tube, and waited years for his doctor's approval to play football. His mom, Jamie Moore, says the moment was a dream come true.

"It was a joy to be a part of it. It wasn't me, like I said, it was a God thing and it started with Coach Rodriguez on the other sideline actually," Harvey said.