An 80-year-old man walked through a blizzard to rescue three cars of people trapped in the storm. 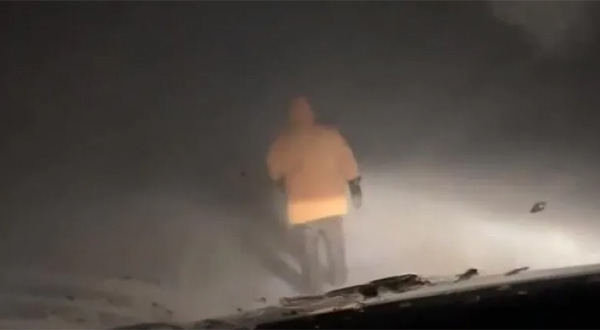 Shannon St. Onge thought she could get home from work before the storm hit Pense, a town in Saskatchewan, Canada.

"Yesterday, the weather network was warning of a blizzard. Expected start time was at around 7pm," she wrote in a Facebook post.

"I grabbed take out for the kids, filled my gas tank, replaced my broken phone charger and then hit the dirt roads around 5:30 to head home before the storm hit."

She took a dirt road because she thought it would be better for the winter driving conditions.

"Just as the pavement turned into gravel, the wind picked up and visibility started to diminish. The wind whips the snow from the open fields across the roads and creates sometimes hazardous conditions," she said.

"I found myself driving with my head out of the drivers window, watching the edge of the gravel as my guide, while I crawled forward at 15km/hr, not actually looking forward at the road ahead. I did this for about 10km, until I could no longer see and I had to stop, right where I was. 12km from home. I tried to walk across the road to gauge where I was oriented but the +100km/hr gusts pushed me backward and I just got back into the car. Soaking wet, and full of sand from the gusting wind, that was whipping gravel and sand all over the place."

She pulled over and called 911. The operator suggested she wait the storm out, but the blizzard that was not projected to let up until dawn.

"Would the gas tank last until morning? What if I was hit by another vehicle? What if I fell asleep and the tailpipe was blocked? What if I didn't make it home at all?" she wondered, according to her Facebook post.

She posted her location on the Pense community Facebook page in hopes someone might be able to find her.

That's when 80-year-old Andre Bouvier Sr. got a call about St. Onge's plea for help. He lived about half a mile away from where she was pulled over.

His tractor would not start so he decided to head out on foot with a flashlight. To his surprise, he found two other vehicles with people who also needed help stranded alongside St. Onge.

He led all seven stranded people back to his home and welcomed them in for the evening.

"The 80 year old farmer walked out with his lantern to get me and guide me back to his house where his 70 year old wife greeted me with a hot pot of coffee and homemade applesauce," St. Onge said.

"This family took seven of us stranded passengers in off the road, fed us, laughed with us, bonded with us, gave us blankets, pillows and a warm place to rest our eyes for a few hours," she said. "When we all woke up at 5am, he had already ploughed the driveway for us, and at around 5:30, we made a little convoy and headed to town. Visibility was better, but still very, very poor."

"In the end, we all made it home safely and I have never hugged my kids tighter."

As for Bouvier, he didn't want much credit for his efforts.

"Everybody would have done the same thing," he said. "You don't think about it, you just do it."