A Wisconsin family has been reunited with their missing dog nearly two years later after the father spotted the dog on a late-night TV news segment. 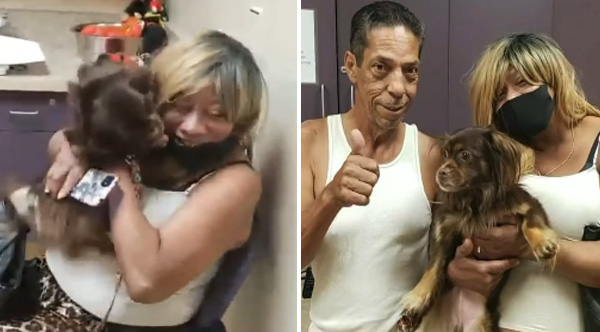 The Wisconsin Humane Society (WHS) said that a man named Dwight contacted FOX6 News Milwaukee because he recognized the dog they had featured on an Adopt-A-Pet segment.

Dwight said it was his long-lost pet named Payday who at the time had been missing for two years.

"He had woken up early last Wednesday to the sounds of FOX6's morning broadcast, just as our volunteer started describing a little brown dog with the most adorable underbite," the shelter said. "Dwight normally turns off his TV every night, but must have left it on by accident – or perhaps thanks to fate. It only took one glance at the picture for Dwight to immediately recognize Payday, his long-lost pup who had gone missing nearly two years ago!"

The WHS shared a video of the exciting reunion on its Facebook page.

"Thanks to FOX6's swift action, Payday was reunited with his family at the WHS Milwaukee Campus that same afternoon. Payday was originally brought home as a companion for Dwight's now 12-year-old daughter, who was still distraught over the incredible loss of her best friend. Dwight's mom, Melissa, came to pick up the beloved pup and – as you can see – it was the most incredible reunion! We are beyond ecstatic for this amazing family to finally be whole again."