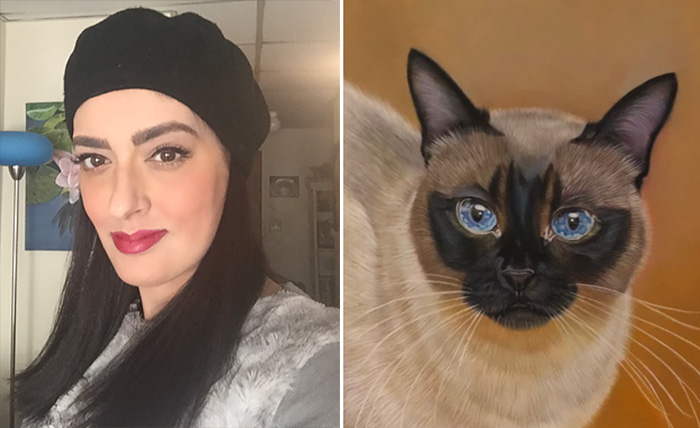 I would like to share my miracle story with others to help inspire them and give them hope it’s a way of me paying forward.

My name is Carina Imbrogno and I was born in 1974 in Buenos Aires, Argentina to Italian immigrants. I was born with a rare genetic disorder called Ehlers-Danlos Syndrome kyphoscoliosis type, but it was not diagnosed until 2015. This illness caused me to have severe scoliosis kyphosis since the age of two. I am the youngest of eight children. We were four girls and four boys. My oldest sister died from Leukemia as a toddler. I grew up with a very difficult father. I realized years later that my father was always ashamed of me because of the way I looked. Growing up I was also bullied and teased by other kids due to my very prominent rib hump. Having many surgeries and wearing orthopedic braces wasn't easy!

I began wearing orthopedic braces and body casts from the age 2 to the age of 11 and then again as an adult. I had my first open back surgery at 10 years old. My spine was collapsing so fast I was having trouble breathing. The doctors explained to us that I needed emergency open back surgery because my ribs were collapsing on my lungs making it difficult to breathe. I had a curve of 89 degrees and another curve of 56 degrees. Doctors explained to us that I have a deadly type of kyphoscoliosis and without surgery I would die. I had surgery and had a rod put in to stop my spine from curving any further.

Unfortunately I had complications. A few days after being sent home from the hospital I developed a very high fever. I went to see the doctor and he discovered I had a massive infection from the surgery. I almost died from this infection which left me hospitalized for three months. Fortunately the infection finally healed but over time the rod that was put in as a child began giving me problems. By the time I was 18 the rod had somehow moved out of place and doctors think it was causing my migraine headaches. I finally had to go for another surgery to remove part of the rod. My migraine headaches finally went away. However I struggled with my severe and painful rib hump and was always fearful that I would never find anyone because of the way I looked.

In 1996 I was accepted to go to school at the Fashion Institute of Technology in New York City to study textile design. I graduated in 2000 with a grade point average of 3.8. My art teacher Susan Rietman who I am very close to always supported me in my work and motivated me to believe in myself. Shortly after I graduated I met someone and got married but, sadly found myself in an abusive relationship. After I separated from my abusive husband I was diagnosed with endometriosis. I had five abdominal surgeries for this illness which resulted in more complications. It was a very painful illness to endure. During this time I had a dream of God telling me that I would go through many difficulties but I wouldn't die and He would always be with me. In late 2004 I had a surgery to correct my prominent rib hump but it was unsuccessful and caused my spine to collapse at a fast rate. I have a very rare and aggressive type of kyphoscoliosis. The doctors told me they couldn't help and that I would end up in a wheelchair and then die. I remained bedridden and highly medicated to stay alive. By 2006 I had a side curve of 115 degrees and a concave curve of 120 degrees. I felt hopeless and very scared. No doctor would touch me because my condition was so severe and complex and I only had State insurance which doesn't cover a $500,000 plus surgery.

One night I had a dream of a white light-filled Being who put His hand through me and straighten my spine. Afterwards in my dream I stood up and walked away. Two weeks later I found the doctor who saved my life. My oldest sister Ana took me to Texas where this doctor was able to correct my collapsed spine and rib hump. I have two rods and 26 screws holding my spine and had nine ribs cut and reduced in size to minimize the rib hump. I grew five inches from the surgery. This was a miracle for me. The success of my operation was called a miracle by Dr. Shelekov and his entire team who preformed the operation. I am forever grateful for what he did for me. Unfortunately he passed away two years later.

After the spinal surgery I was doing so well that I was able to take a trip to Argentina to see my parents. I especially wanted to see my mother who hadn't believed I was well. Unfortunately a couple of years after my surgery I started to suffer from severe depression and anxiety. I had never felt this way before. The doctors eventually discovered I had ovarian failure and was going into early menopause. There were no medications I could tolerate due to the many side effects and sensitivities I have. At this point I was 33 years old. I was living in my brother's basement at this time and my unmedicated depression and anxiety got so bad that I spent four years feeling hopeless and bed ridden. The one person who gave me hope was Father Frank who visited me. In 2013 I went to the Mayo Clinic in Minnesota where they discovered I had pelvic floor muscle dysfunction which added to my IBS making it hard to go to the bathroom.

Amidst of all this suffering one day in 2013 I got a letter in the mail saying I was next on the list to rent a small apartment for people with disabilities in Stamford, CT. The news made me so happy because I had waited for eight years for this opportunity, but at the same time I was scared due to my many health issues. By October of 2014 I was so ill that I wasn't able to drink or eat and weighed only 92 pounds. I remember calling my college professor Susan Rietman who advised me to come to Mount Sinai where they were able to find a treatment that I could tolerate. Another miracle. I spent my 40th birthday in Mount Sinai hospital. At this time I was praying to God and I promised Him if He saved my life once again I would start drawing and painting since art was always something I wanted to do. After a few weeks I began feeling better but just a few days after being discharged from the hospital I came down with a pulmonary embolism and once again landed in the hospital. Doctors warned me if the blood thinners didn't work I could die. I was petrified but I kept thinking about my dream with God and somehow I knew I was going to be okay.

A year before when I watched a movie called Heaven is For Real I was introduced to the artist Akiane Kramarik's life and work. This child prodigy inspired me to do art, especially to paint. Her story about meeting God helped me to see and believe that my dreams where for real.

As soon as I was better a close friend of mine David Anderson helped financially to buy art supplies to start my art. He always believed in me even when I doubted. I began to teach myself how to draw and paint. I am mostly self taught in fine arts. I should mention that for me learning is a true challenge because I have Attention Deficit Disorder and Retention Deficit Disorder, two challenging learning disabilities. I've discovered that I am able to learn best hands on. So for the past four years I've been drawing and painting in different mediums such as gouache, dyes, watercolors, color pencil, graphite, acrylics, oils and pastels. Because of my disabilities and limitations I work a lot from photographs.

I started doing portraits after I began volunteering in a daycare doing arts and crafts with children once a week. They inspire me to draw and paint them. I also draw and paint animals. I also love to paint animals, including people's pets. I work with a lot of details so my work looks highly realistic. I have a true passion for what I do. I have entered over 10 juried exhibits where my work was accepted in all the shows. In January of 2017 I won third place at the Stamford Art Association. I entered the very first portrait I ever did which was of my mother, who sadly I'm losing to Alzheimer's disease. Winning with the portrait of my mother meant so much to me. I went on to win first place with the portrait of Jaden in graphite at the Rowayton Art center. And I won third place with a graphite portrait of Melissa. My accomplishments have made me work ever harder. My story was published in a Spanish newspaper called La Voz and most recently it was p! ublished in English and Spanish in a magazine called Latin Colors.. You can go to the following link,‭Carina Imbrogno, Artist and ‬Champion of Life – Liber-Art.

I'm very grateful for the connections I've made through Instagram. I got very inspired by a friend on Instagram by the name of Richard Macwee who is based in Scotland and is an amazing wildlife artist. His work inspired me to continue drawing animals. I also feel very grateful and blessed to have migrated with my famliy to the USA where my life has been saved so many times. My goal is to eventually teach what I know and to keep getting better and better at what I do. I am open to trying different techniques. I have my studio is my small living room but I hope to one day have a studio away from my apartment.