Fans Break Into Keanu Reeve's Property. Instead Of Calling Police, He Has A Beer With Them

Back in 1990, two fans trespassed on Keanu Reeves' property and boldly knocked on his door. Instead of calling the police and having them removed, he had a beer with them.

The story was recently posted on Facebook by one of the trespassers, Chris Johnston, who also posted photos as proof because "no one would of ever believed us." 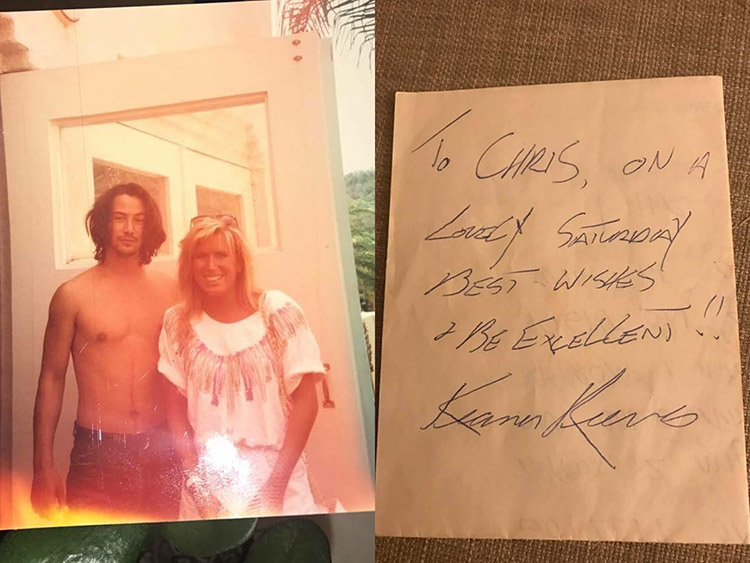 "We were in California for the 'World Softball Tournament' that Ned was playing in. My cousin lived there and worked for the American Cancer Society at the time. She knew where a lot of the celebrities lived because they would host events. At the time I was in love with Keanu.. well still am :) and she took me to his house."

"We climbed the wrought iron fence to his property, walked up the winding driveway to his home. Knocked on the open door, that he could not hear us knock on because he was playing guitar with his back to the door. When he turned around and saw us there, he simply asked who are you and how did you get here.

After, we told him the story and asked him not to call the police. He invited us in, gave us a beer and spoke with us. I told him how I was there for my boyfriend's softball tournament and how instead of watching him play, I was going to see him. He wrote that note for Ned and I. Best Wishes to him in the softball tournament. He was such an awesome guy! If this happened today, I am not sure the outcome would be the same. This was 1990 before how crazy everyone has got. Plus, he is who he is .. so he was totally cool with it all.

When we left, I had accidentally exposed the film in the camera, we went right to a one hour photo shop with the hopes of having the pictures saved... after an agonizing wait, there were only 3 pictures that were not all yellow from exposure... I was so grateful because no one would of ever believed us. Sometimes I still can't believe it."