'Everyone Deserves To Eat, No Questions Asked': Restaurant Offers Free Food To Those Who Can't Afford To Pay

"Everyone deserves to eat, no questions asked" – that's the motto at Marché Restaurant Ferdous in Montreal.

The restaurant offers free food to those who can't afford to pay for a meal.

"People sometimes come here, you have no idea by their look that they need the food and they're shy or they don't believe in such things. So we told the cook, 'Don't ask any questions; do not judge them.' If they ask, just give them the food, that's it, that's all," said co-owner Yahya Hashemi.

"Especially when it's cold, they just want to eat," said Hashemi.

"It doesn't matter, because at night if you still have leftover food you end up throwing it out, so why not give to those in need? It's not a big deal," said chef Abdelkader Bejaoui.

"It's just a sandwich, right, it's not life changing to most people, but to some people, it means they won't go to bed hungry and that to me spoke mountains about it," said customer Sean Jalbert.

"We have to reflect our real image of Islam and Muslim people, immigrants who want to work hard and participate in this great country to contribute in its economy and social tissue," said co-owner Ala Amiry. "It's part of religion, this kind of tradition. You have to give to the people if you want the blessing from God."

They're hoping the good deed inspires other restaurants to do the same. 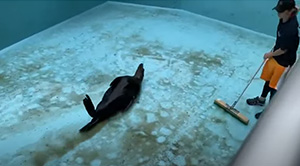