A community in Florida stepped up to help a stranger after local police posted photos of him stealing diapers from Walmart.

The Winter Haven Police Department posted photos to Facebook of a father with two kids shopping in Walmart. They said the man attemped to buy the items in his cart (diapers and wipes) but after his credit card declined multiple times, he decided to take the items without paying. 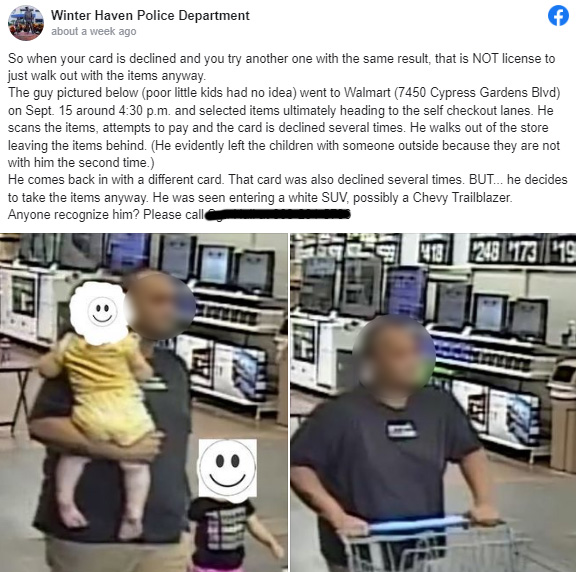 The police department was asking for help from the public to identify the man.

"So when your card is declined and you try another one with the same result, that is NOT license to just walk out with the items anyway," the department wrote in the post.

However, the public had no intentions of turning the man in. Instead, they wanted to help the man.

"Doubt I will get a response but I will pay for these items as long as you leave this man alone," one user commented.

"While I don't condone stealing why don't y'all step up and see how you can help this dad instead of berating him. I'll help pay for the diapers and wipes," another wrote.

The police department's post received hundreds of similar comments, which resulted in the charges being dropped.

"We know everyone is enthralled with the case of the Walmart shopper who walked out without paying after three attempts with three different cards," a spokesperson for the department wrote in an update. "We did receive a tip of his identity this morning and we made contact with him. We also have been speaking with Walmart and they have signed a waiver of prosecution, meaning no charges will be filed. We delivered this news to the citizen. We also told him of numerous resources available to include the Police Department. We offered assistance and he declined assistance. Thank you to all of the caring citizens offering help."