Nearly 1,000 girls were part of the first class of female Eagle Scouts after the program began accepting females in 2019. 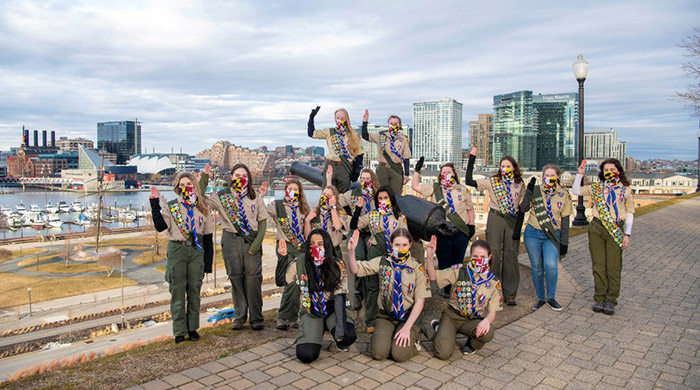 Eagle Scout is the highest achievement or rank attainable in the Scouts BSA program. Only 6% of Scouts ever make it to the top.

The rank takes at least 21 merit badges, a large service project and a commitment to leadership.

On Sunday, the Scouts hosted an online ceremony to welcome the new group of female role models.

"I don't think any of us really thought this day would come," recipient Kendall Jackson told CBS News. "For me to be a part of that first class and say that I did it, I'm really proud of myself."

Jenny and Jessica Hosken grew up watching their brother Dennis become something they couldn't-- an Eagle Scout.

Sunday night, they were part of the inaugural class of female Eagles Scouts recognized by Boy Scouts of America. https://t.co/bSa1sDEkn0 pic.twitter.com/GBkxscAFFS

"Eagle Scout is so much more than a medal or an award. It's an expectation and a lifestyle. It means that you're a role model to your community every day of your life. Once an Eagle, always an Eagle," said Lyndsey Nedrow, who earned the rank with her sister, Lauren.

"This is a powerful moment for these young women, for all Eagle Scouts, and for our nation," Jenn Hancock, the BSA's national chair for programs, told the AP. "People recognize Eagle Scouts as individuals of the highest caliber, and for the first time, that title isn't limited by gender."