Sylvia Rose Viarrial - She Was Not Only My Lay Advocate, She Is My Angel

I never write these type of stories but what was my Lay Advocate and is my "angel," Sylvia Rose Viarrial has taught me many things. One major thing I will carry on hoping it will give hope to another survivor of Domestic Violence and Sexual assault.

When I met Sylvia Rose Viarrial, I had just got my daughter taken away and given to her abusive father, not because of any neglect or abuse on my part at all but because I decided to STAND against my daughters father, who was part of our tribal government and used his weight in my tribe to try to punish me for leaving him because he abused me very badly for many years. Everyone knew but everyone was just used to it . I felt so alone because women in our community usually never stand against men in our community when they are abusive, period. But I also was dealing with standing against a man who is in our tribal government, so your supposed to be silent. After getting my daughter taken because our courts sided with him because he was in tribal government and no one cared about the abuse of my daughter or myself. They really didn't care. My community turned on me. But my mom who has gone on her journey and passed always told me, "When you leave him, God will send you an Angel."

Years later after my daughter told me he hurt her in a horrible way and one night after he almost killed me, I knew I had to leave. So I did. With everyone's back turned on me and everyone wanting to sweep everything under the rug and wanting me to stay SILENT. I felt so alone. But then as I saught assistance, that's how I met Sylvia Rose Viarrial and she shared her story with me, she had so much compassion. Her story was almost identical regarding her child and her childs abusive father. She inspired me more than ever to fight and never give up because although, she was put through horrible abuse by her child's father, she has taken all her challenges and helps other woman and children just like us. I thought who am I to NOT be strong also?

Everyday I wake up fighting for what's right, I just think of, "my angel," and all I tell myself is, if she can fight through it, I must fight also. This is what native woman need to be to eachother, great inspirations. Our mothers and grandmother our ancestors would have only wanted this. So If you are reading this and you are a survivor or victim of domestic violence and sexual assault, native or non-native, I believe if you take that step to get free from abuse and break the silence, no matter what your facing, like my mother said, "God will give you and Angel to help you through." Be brave, Our children need us. 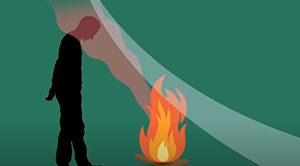