To The Man On The Plane 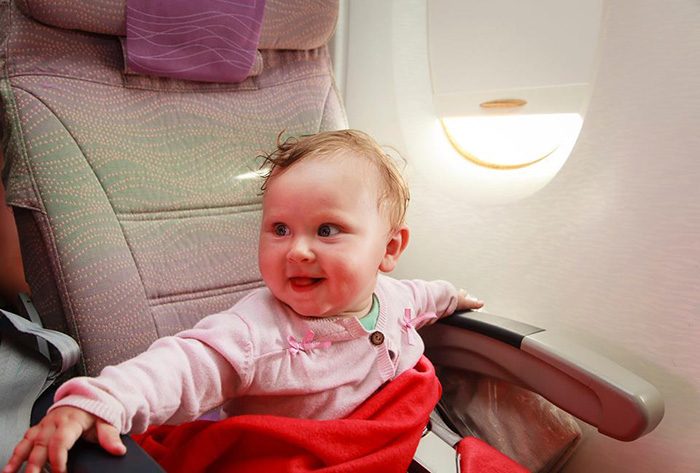 My husband was deployed once again. My closest family was literally nearly 5,000 miles away. The isolation of being in a new area without any support consumed me and I finally agreed, much to my parents' delight, to come out for a prolonged visit. My biggest apprehension was making such a long trip. With a toddler. By myself.

I prepared well, relying on prior experience. Crayons. Books. Games. Toys. Snacks. Her favorite blankie. I spent hours trying to find flights with perfectly-timed itineraries, hoping she may be able to nap on the plane.

Of course none of that mattered, and deep down, I knew it. We were going to be spending hours and hours on a loud, tightly-confined air plane. And of course fits of rage ensued.

I had such anxiety about her airborne tantrums. Once before, I had had a very rude man tell me to 'shut that child up before I do' when my very tired infant would not stop crying. I choked back tears as I ignored his comment and continued to try to soothe my baby. It had traumatized me a bit and I vowed to never fly again after that.

But here I was. However, this time was different. The first hour wasn't too bad, but the tiredness and restlessness came on quickly after that. Much to my relief, the man sitting directly next to us seemed patient when she began to whimper and whine. I worked diligently trying to divert an outburst. But it escalated. Hysterical crying. My heart raced as I tried to ignore any irritated stares and eye rolls and focused on soothing her.

But then the man sitting next to us did something I didn't expect. He told me with a smile, 'You're doing great, mom.' He then suggested I switch seats with my daughter so that he could sit next to her. I agreed. Then he pulled out his iPad to show her pictures of his grandchildren. He opened a game and showed her how to play it. He talked with me about his life and asked me about mine. He helped occupy my daughter and soothed her when she fussed. He was so patient and loving.

Before I knew it, the 6 hour flight was coming to an end. We had survived. And the man helped me with my bags as I carried her off the plane. He walked us to the baggage claim where my parents greeted us. Then he said good-bye and quickly disappeared. I explained to my Mom with tears in my eyes what this man had done for us.

He didn't judge me. He didn't grow irritated when the screams and crying started. He didn't say something rude to me in a moment of irritability. He gracefully sacrificed his time and energy to help a distressed mother and child. He was understanding. He made our flight, not just bearable, but pleasant. I often think of him all these years later. It was the kindness of a stranger that got us through that day and I will always be thankful for him.