A group of Good Samaritans in Boynton Beach, Florida, sprang into action on May 5 to help a woman who suffered a medical episode while driving. 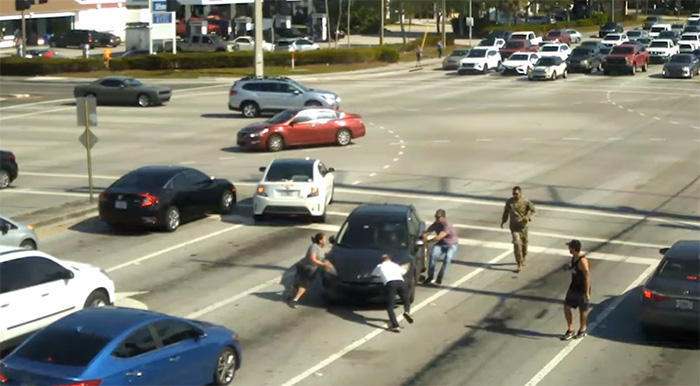 As her car slowly entered the intersection, her co-worker raced across the street waving her arms to get the attention of other motorists. Her co-worker was in another vehicle and saw her slumped over the steering wheel.

Several people got out of their vehicles and worked together to stop the moving car. One woman grabbed a dumbbell from her car and a man used it to smash the rear passenger's side window.

Another man then climbed through the window to unlock the passenger's side door.

The car was then put in park and the Good Samaritans pushed it to a nearby 7-Eleven parking lot where a nurse who was on the phone with 911 provided medical attention until the fire department arrived.

The footage was posted by the Boynton Beach Police Department in hopes of "learning the identities of all the strangers who came together to save this woman's life."

In an update posted to social media, the department said they have been in touch with several of the Good Samaritans and will be honoring and reuniting them with the woman they helped rescue.