A man with no flying experience landed a plane at Palm Beach International Airport on Tuesday when the pilot became incapacitated. 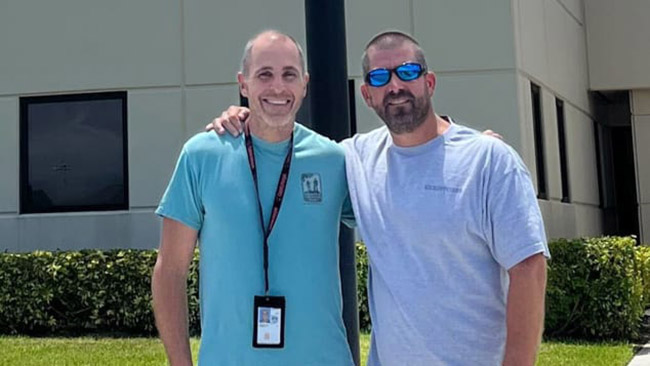 Robert Morgan, left, and the passenger

The FAA said the incident began around noon when the pilot "told his two passengers he wasn't feeling well. He fell against the controls, putting the aircraft into a nosedive and sharp turn."

A passenger grabbed the controls, pulled the plane out of the nosedive and radioed air traffic control.

"I've got a serious situation here, my pilot has gone incoherent," the passenger can be heard saying to air traffic control. "I have no idea how to fly the airplane."

"I rush over there and I walk in and the room is really busy ... and they're like, 'Hey, this pilot's incapacitated. The passengers are flying the plane. They have no flying experience," Morgan told CNN.

"I have no idea how to fly the airplane." Pilot of small plane passes out while flying off the coast of Florida. Passenger, who had never piloted a plane before, successfully lands it after air traffic controller Robert Morgan talks him through the procedure. pic.twitter.com/vDxWSgsPvz

But Morgan had never flown a Cessna Caravan, so he used a photo of the cockpit to help guide the passenger.

"I knew the plane was flying like any other plane," Morgan said. "I just knew I had to keep him calm, point him to the runway, and tell him how to reduce the power so he could descend to land."

And that's exactly what he did, talking the passenger all the way through the wheels touching the runway.

Other pilots were stunned, as another air traffic controller relayed across the airwaves what had just unfolded.

"You just witnessed a couple of passengers land that plane," the tower operator can be heard telling an American Airlines pilot waiting to take off for North Carolina.

"Did you say the passengers landed the airplane?" the American Airlines pilot asked. "Oh, my God. Great job," he said.

After the plane landed, Morgan met his new student on the tarmac, who gave him a big hug and said thank you.

"It was an emotional moment. He said that he just wanted to get home to his pregnant wife," Morgan said. "And that felt even better."

The condition of the original pilot is still not known, the Federal Aviation Administration said in a statement.