A DoorDash driver in Massachusetts used knowledge from her time training as an EMT to save a customer's life when she found a woman unresponsive in the driveway.

Caryn Hebert Sullivan ordered a pizza through DoorDash on a Friday evening in Fairhaven, MA. While waiting for her order outside, she fell and hit her head.

Sullivan was unconscious and bleeding from her head.

"I just remember laying on my driveway, thinking, 'This is pretty much over'," she said. "I was laying there and saw a lot of white clouds."

She noticed Sullivan's blood was congealing and estimated she had been lying outside for about 15 to 20 minutes. 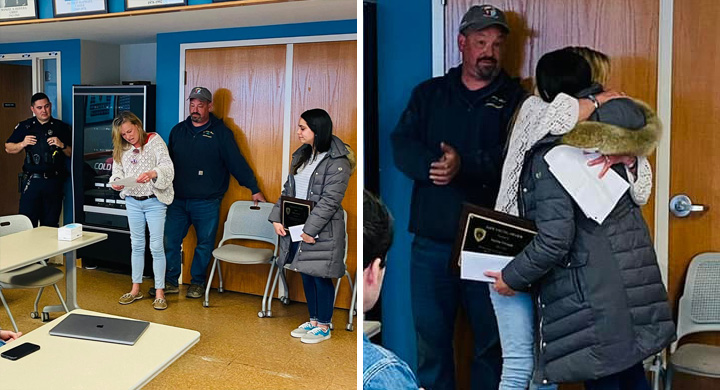 "Caryn was unresponsive, and her eyes kept rolling to the back of her head," Furtado said, "I felt like I was going to lose her."

After calling 911, Furtado wrapped a blanket around Sullivan's head and applied direct pressure to the wound. She kept Sullivan stable and updated dispatchers on her condition.

When first responders arrived, Furtado continued helping until Sullivan was taken to the hospital.

Police say Sullivan went into emergency surgery at 2 a.m. for severe brain bleeds. Her doctor says if there had been any delay in her care, she would have died.

"Any first responder can tell you, what Sophia did that night was not something anyone would just do," the police dept. wrote on Facebook. "She saved a life."

Sullivan spent weeks in the hospital after the incident and months recovering. She credits Furtado with saving her life.

"I am so thankful for her. She's my guardian angel," Sullivan told CNN. "Thank God, she was there. If she wasn't there, I'd be dead."