She Prayed For Help During A Flash Flood. Marines Showed Up 45 Seconds Later

A woman has reunited with the Marines who rescued her from a flash flood in Arlington, Virginia. 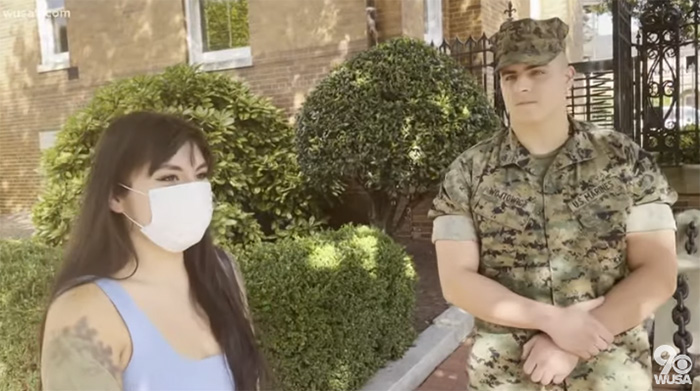 Virginia Waller-Torres said a prayer to be saved from deepening flash flood waters outside Arlington National Cemetery and the Marines showed up 45 seconds later.

"It was like they were sent from somewhere else, from a higher power," Waller-Torres told WUSA9. "I thought I could die, a truck could hit us. And it was as though, somebody heard me."

They were all Marine Corps Body Bearers – a unit which performs funeral services at the cemetery.

Waller-Torres reunited with both Cpl. Wojtowicz and Cpl. Jared Tosner at the Marine Corps barracks in Southeast Washington Monday. Both Marines were met with an embrace and a high-five.

What the Marines didn't realize during the rescue, was that Waller-Torres' grandfather was a World War II veteran, buried in Arlington. Her father was in the Navy during the Persian Gulf War, and she was born in the Panama Canal Zone.

"My father said in the Gulf War, he did, and continues to have, such respect for the Marines," Waller-Torres said. "I sent him the video, and he called me back, and he started crying. Because it was so emotional for him."