A bill to connect more veterans with service dogs trained to support mental health conditions is headed to the President's desk. 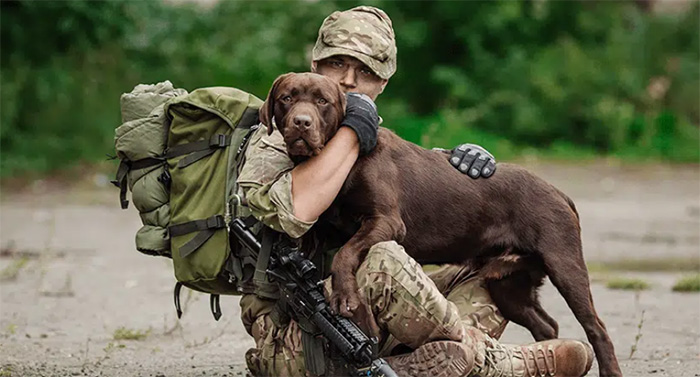 On Friday, the Senate passed the Puppies Assisting Wounded Service Members for Veterans Therapy Act, or PAWS Act for short, which requires the Department of Veterans Affairs to create a pilot program for veterans with post-traumatic stress disorder to train service dogs.

The bill is now headed to the desk of President Joe Biden, who is expected to sign it.

"Many veterans with mobility impairments have had their lives changed -- in some cases, saved -- by service dogs," said Sen. Kevin Cramer, R-N.D., one of the bill's cosponsors, in a statement Friday. "Our bill would expand this treatment by launching a pilot program to make veterans with mental health issues such as depression eligible to receive service dogs."

"It's a big deal for veterans with post-traumatic stress disorder. I think it'll lower the suicide rate and give these veterans their lives back," said former Rep. Steve Stivers Stivers.

The Department of Veterans Affairs would work with organizations like K9s for Warriors, a Florida nonprofit organization that provides service dogs to veterans.

Of the more than 700 veterans who have been through the K9s for Warriors program, 72 percent had attempted suicide before being paired with their service dogs, says Rory Diamond, the CEO of K9s for Warriors.

"We're incredibly good at keeping them alive," Diamond said. "So why wouldn't the VA want to be part of that?"

Becca Stephens, a 36-year-old combat veteran who served in Iraq, was diagnosed with PTSD in 2011. She was paired with Bobbi, a golden Labrador, three years ago through K9s for Warriors.

With Bobbi by her side, Stephens said, she is now three years sober and out in public all the time. She said the dog has given her a new "leash" on life.

"When I started to trust myself and respect myself and treat myself right, she could see that," Stephens said.