'Nothing Like How Movies Depict It': Man Rescues Pair From Crashed, Burning Car

It's a night Gabriel Lascurain will never forget.

The shuttle driver for Bend's B&R Auto Wrecking in Deschutes County, Oregon, was on his usual route along Highway 126 early Monday morning when he spotted a crashed car engulfed in flames over the embankment, with a young man and woman trapped inside, screaming for help. 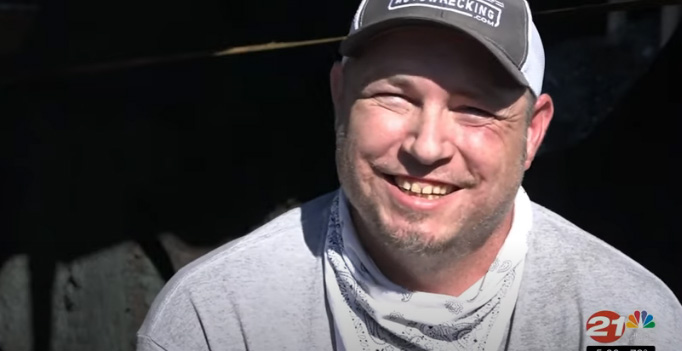 Lascurain said he wasn't sure what was happening at first, but realized fairly quickly this was a 'fight or flight' moment - and at 2:15 a.m., the 43-year-old decided he had to fight.

He jumped over the embankment and, using the tools in his tow truck, managed to pull the two occupants from the car, just moments before it exploded.

"Nothing like how movies depict it," Lascurain told News Channel 21 Wednesday. "It was so much harder to actually deal with, physically, no matter how strong I was, and emotionally. The thoughts and decisions I had to make at a split-second -- I had to just put myself aside and say, 'I have to do this.'"

"There was a moment when I literally thought, 'I might die,'" Lascurain recalled. "'If I get close enough to that car right now, if I got back and get him, I'll die.'"

However, Lascurain said giving up just wasn't an option, especially knowing what was at stake -- two lives.

"I was just kind of holding (the female's) face, and just trying to comfort her, and she reminded me of my daughter," Lascurain said. "She was a blondie -- my daughter is a blondie. I'm thinking, 'Father's Day is coming up. I couldn't imagine losing a child this close to Father's Day.'"

Oregon State Police said the driver fell asleep and ran off the road.

Lascurain said he believes if he'd arrived at the scene just a couple of minutes earlier, he wouldn't have noticed the flames. And if he was one minute later, they might have already been dead. He wasn't even supposed to be there at that time, but his only guess is that it was meant to be.

"There's got to be a purpose I guess," Lascurain joked. "I don't know. I don't know. I'm just grateful that I was there. It makes no sense how I was there right at that exact same minute, right on time. Why did I leave early that morning? Why did I stop -- make that one stop before I even got to that point on the road? Why? There's a whole bunch of whys, but it all worked out."