How A Teacher Disarmed A School Shooter With Motherly Love

When a student opened fire at an Idaho middle school, teacher Krista Gneiting directed children to safety, rushed to help a wounded victim, and then disarmed the shooter, hugging and consoling the girl until police arrived.

Parents are crediting Gneiting's display of compassion with saving lives. 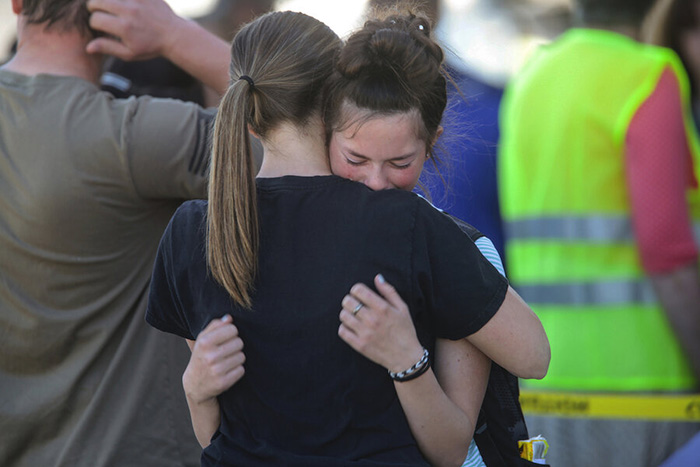 Krista Gneiting, a math teacher at Rigby Middle School in the small town of Rigby, about 15 miles northeast of Idaho Falls, was preparing her students for their final exams on the morning of May 6 when she said she heard a gunshot from down the hall. She said she looked outside her classroom and saw the school's janitor lying on the floor at the end of the hallway. She said she shut the door as she heard two more gunshots.

"So I just told my students, 'We are going to leave, we're going to run to the high school, you're going to run hard, you're not going to look back, and now is the time to get up and go,'" Gneiting said in the interview shown on Good Morning America.

Police said a sixth-grade girl brought the handgun in her backpack and shot two people inside the school and one outside. All three were wounded in their limbs and released from the hospital within a few days. 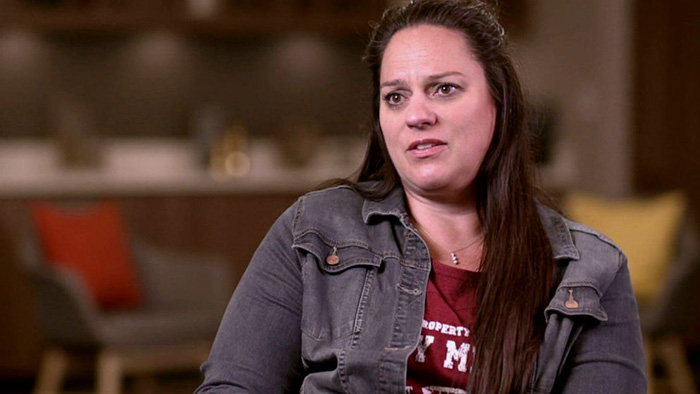 Gneiting said she was trying to help one of the students who had been shot when she saw the girl holding the gun. She told the wounded student to stay still and approached the sixth-grader.

"It was a little girl, and my brain couldn't quite grasp that," she said. "I just knew when I saw that gun, I had to get the gun."

She asked the girl, "Are you the shooter?" and then walked closer, putting her hand on the child's arm and sliding it down to the gun.

"I just slowly pulled the gun out of her hand, and she allowed me to. She didn't give it to me, but she didn't fight," Ms. Gneiting said.

"And then after I got the gun, I just pulled her into a hug because I thought, this little girl has a mom somewhere that doesn't realize she's having a breakdown and she's hurting people."

Gneiting held the girl, consoling her until police arrived.

"After a while, the girl started talking to me, and I could tell she was very unhappy," Gneiting said. "I just kept hugging her and loving her and trying to let her know that we're going to get through this together. I do believe that my being there helped her because she calmed down."

When a police officer arrested the girl, Gneiting said she explained to her that "he needs to put you in handcuffs."

"She didn't respond, she just let him," she said. "He was very gentle and very kind, and he just went ahead and took her and put her in the police car."

The girl has been charged in the shooting, but because juvenile court proceedings are kept sealed in Idaho, neither her name nor the nature of the charges has been released.

Gneiting's brother-in-law, Layne Gneiting, said that when he first heard about the shooting, he thought Krista Gneiting's inner "mother bear" had sprung into action to protect the students. He soon realized it was another side of her strong parental instinct. 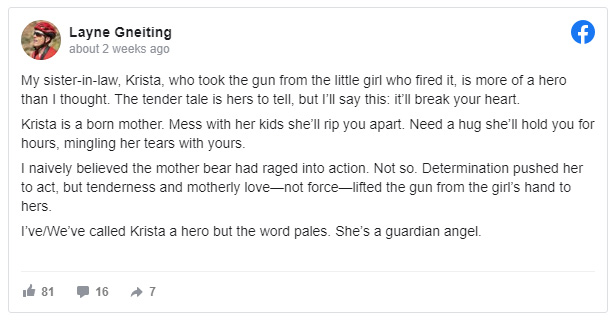 Meanwhile, Krista Gneiting hopes people can forgive the girl and help her get the support she needs.

"She is just barely starting in life and she just needs some help. Everybody makes mistakes," she said. "I think we need to make sure we get her help and get her back into where she loves herself so that she can function in society."

Watch the interview below.