A group of Louisiana State University fraternity brothers paid off the mortgage of their former house cook Jessie Hamilton. 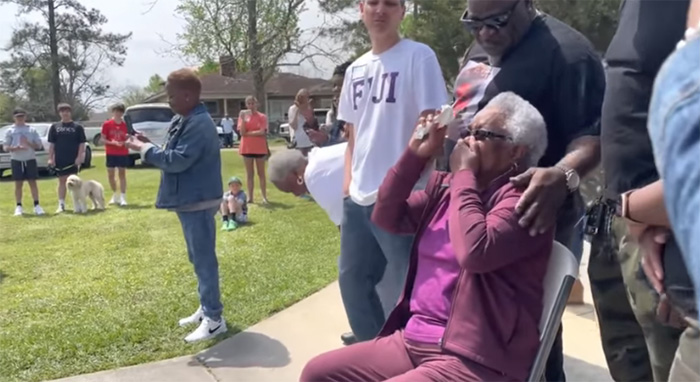 About a dozen members of Phi Gamma Delta and their families surprised Hamilton on her 74th birthday with the money to pay off her mortgage.

"They were my kids. They still are," Hamilton told the Washington Post. "They used to tell me they loved me, and now, they've proved it."

Hamilton worked at the fraternity house from 1982 to 1996. She would start her days at 4 a.m. to get to campus in time to serve the boys breakfast, lunch and dinner. Brothers could also depend on Hamilton for rides to the grocery store and the doctor.

Andrew Fusaiotti, a brother who attended LSU from 1987-89, said he called Hamilton at the start of the pandemic just to check on her. Fusaiotti says he has kept in touch with Hamilton over the past 30 years.

"That's when she told me she was still working two jobs," he said. "I asked her why, and she said she couldn't afford to retire."

Determined to help her, Fusaiotti had the idea to raise money through his frat brothers to pay the rest of Hamilton's mortgage. After speaking with her children, he learned that she had 16 years left on a 30-year mortgage, and needed $45,000 to pay it off.

"That shows how they all felt about her," Fusaiotti said. "Jessie is one of these people that shows up to work and always has a smile on her face, eager to please and never complains."

"She is the type of person that inspires me, people that don't have a lot, but give a lot. She's the most giving person you've ever met," he added.

Hamilton said she plans to retire, and enjoy retirement from the comfort of her paid-off home.

"This has been a blessing to me," Hamilton told The Advocate. "I have been worrying about how I was going to pay my house off. I am grateful for what God has done and has led them to do for me."