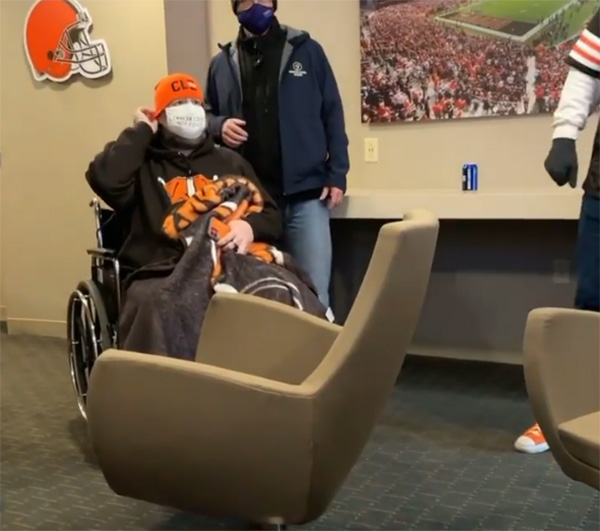 Tom Seipel arriving to the game

Tom Seipel, a husband, father, pastor, and missionary, has been battling kidney cancer for the past three years. In the past few weeks, Tom was placed into hospice.

He made a goodbye post on the Browns Reddit community page that said "Thanks for the memories and fun." He explained in the post that he has stage 4 cancer and doctors have given him one or two weeks to live.

"I was hoping to finish the season but oh well. Best season I've seen since the mid 80s. I always wanted a Super Bowl before I died. Hope you guys get to see one. I'll be rooting from up above," Tom added in the post.

So, Browns fans acted fast and raised more than $20,000 for Tom to fly with his father to Cleveland from Georgia to watch the Browns take on the Pittsburgh Steelers in the final game of the season. 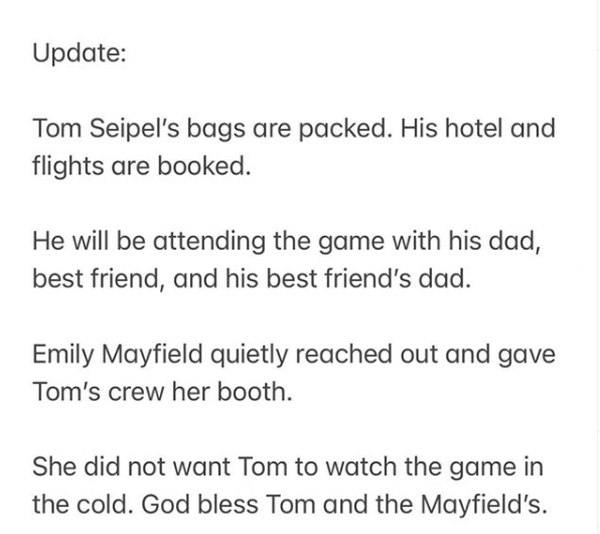 Emily Mayfield, the wife of Browns quarterback Baker Mayfield, heard that Tom was flying out to Cleveland for the game, and offered him her suite tickets so he and his father wouldn't have to watch the game in the cold.

Baker also sent Tom a video on Christmas Eve to tell him how inspiring his battle is, which "meant the world to Tom".

On January 3, Tom arrived at FirstEnergy Stadium in Cleveland.

"This is the greatest day. Cant thank @emilywmayfield enough for giving this man the experience of a lifetime. And also the rest of you. Seriously. Tom is so overwhelmed with joy and support, it's unreal," the Angry Browns Fans Instagram page wrote in a post.

The Cleveland Browns did in fact beat the Steelers 24-22 and have made the playoffs for the first time since 2002.

Tom says he is hopeful he will get to watch another game.