Man Tackles And Punches Bear To Save His Dog

A California man's Thanksgiving brawl against a bear saved the life of his beloved dog. 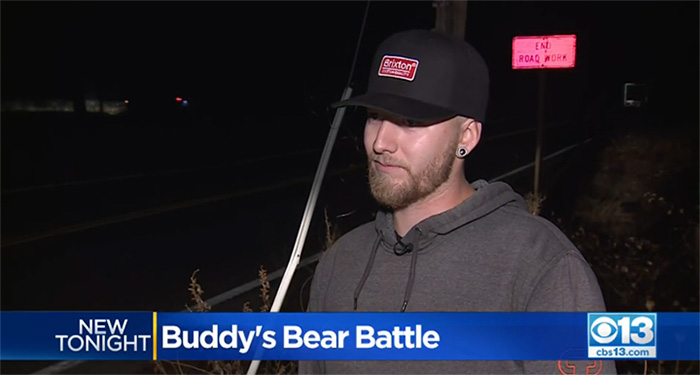 Kaleb Benham says he was inside his home in Grass Valley, CA, when he heard a commotion outside.

He looked outside and saw a 350-pound black bear attacking his dog, Buddy.

"I heard a growl, looked about 75-100 feet down, and the bear was dragging him by his head, had his head in his mouth," Benham said.

He immediately sprang into action.

"I just ran down there, plowed into the bear, tackled it and grabbed it by the throat and started hitting it in the face and the eye until it let go."

A man’s love for man’s best friend is a powerful force. Kaleb Benham from Grass Valley took on a 350 pound bear that was attacking his rescue dog, “Buddy.” Kaleb said he heard a growl the saw the bear dragging buddy “by his head.” So he tackled the bear and punched it pic.twitter.com/XAhTrS2AEC

Buddy recieved emergency surgery to insert staples, stitches, and a tube to drain fluid from his head. He is now recovering back at home.

Benham says he rescued Buddy from a shelter a few years ago. He didn't hesitate to rescue him again -- this time from the jaws of a 350-pound bear.

"Honestly, the only thing I could think of was 'save my baby'," he told CBS Sacramento.