A husband and wife who've been married for 70 years are now back together after spending months apart during the coronavirus pandemic. 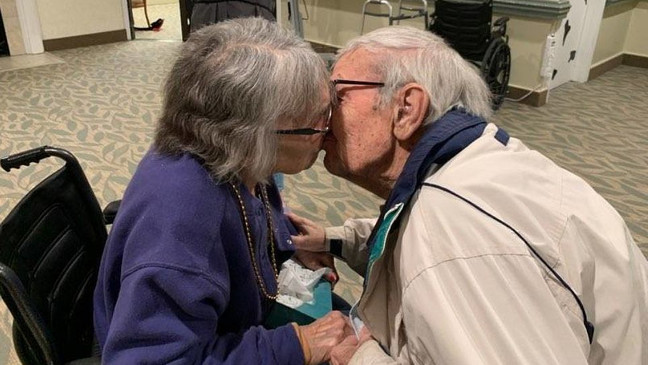 Walter Willard, 91, and Jean Willard, 89, were finally reunited this week — and they could not stop hugging and kissing each other.

Their daughters, Wendy Willard and Wanda Glenn, said their parents were always in good health, until last year. Jean fell and broke her pelvis, which landed her in the Eddy Memorial Geriatric Center in New York. She also showed signs of dementia.

The nursing home was around the corner from Jean and Walter's house, so Walter would visit her every day.

"My dad would go over there every day and spend most of every day, in the beginning he was there all day from the morning until night when she went to bed," Willard told WRGB.

But due to the pandemic, the nursing home had impose restrictions. Walter was no longer able to visit. His daughters said Jean would cry and ask for him.

"Then the virus happened and he couldn't go anymore, and he went downhill so quickly when he couldn't see her," Wendy added.

Walter also suffered a health setback. He fell, which caused a brain bleed and led to surgery and rehab. During this difficult time, their daughters knew they had to find a way to get him back to Jean.

So Wendy wrote a letter to the facility's director, and he had a change of heart.

Last Thursday, the staff sent the family a video of the couple reuniting.

"Oh honey I'm so happy to see you!" Jean said to Walter as they held hands, hugged and kissed.

Now, Walter and Jean are sharing a room at the nursing home, and their children can't wait to visit them.

Watch their reunion below.