A mother of three didn't hesitate to stop and help a "big, hairy, tatted up biker" who was stranded on the side of the road. 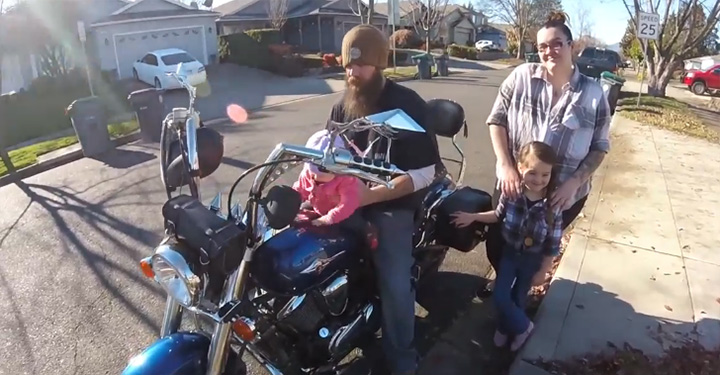 Wearing dark clothes on a freezing night, Grant Hidy was hardly banking on someone seeing him and his stalled-out motorcycle on the side of the road.

To his surprise, a mother with her 4-year-old daughter stopped to check on him.

"I was on my way home from work tonight Around 7:30 when my motorcycle ran out of gas," Hidy wrote on Facebook.

"Stupid me, I know... My bike stalled out on Columbus near 4th street and I was forced to have to pull over, not sure which road I pulled down. A wonderful young woman, I believe she said her name was Tina, pulled over to make sure I was okay. I explained what happened and she offered to go grab me some gas as she had a gas can on her.

Before I could say no, she rushed off and spent the last of her change to make sure I could get home to my family.

My goggles were frozen, and so were my hands and beard. I was in a pitiful state, with no cash to offer for repayment.

If anyone knows this woman, if she's told anyone about stopping and helping a stranded biker, please let me know who she is. I have a Target gift card for her.

She didn't have to stop... Few people would.

A big, hairy, tatted up biker on the side of the road gets more dirty looks than smiles. Help me find her! Thank you!"

Smithee-Ortiz said she only responded to Hidy's post — after being tagged — in hopes the story would inspire others to be more kind.

"If I was broken down, I just hope someone would care enough to stop and ask if everything was okay," she told The Mail Tribune.

Smithee-Ortiz said she planned to use her remaining seven quarters the next time she needed to go to the laundromat, but decided helping Hidy was a better way to use them.

"She tried to downplay it all but, I mean, it was a big deal to me," Hidy said.

"Nobody would've stopped. I told her, ‘I look like a serial killer'," he joked. "Nobody's going to stop and ask me if I need any help. When I go into grocery stores, security follows me around like I'm going to steal something."