My husband Bill's Grandma Z. was in a nursing home when we moved back to Michigan. Grandma had been unable to walk for quite some time; now her eyesight was almost gone.

Over the years Grandma Z. and I had exchanged many cards and letters. I knew how she enjoyed staying in touch with people. Since we'd moved back to Michigan, Grandma Z. thought I should be her "personal secretary." Trying to jog her memory I said, "I guess you've forgotten how bad my handwriting is." Grandma Z. acted like she didn't hear me. Grandma would have me write letters to go in the cards she would send. She would dictate; then I would do my best to write down what she said. Grandma would always have me read what I had written back to her. Grandma didn't have a problem hearing then because she was always telling me, "That is not exactly how I said that!" I would then rewrite whatever I wrote in her exact words.

Since I had some extra time before Christmas, I asked Grandma if she would like to send out some Christmas cards. Grandma readily agreed. I rounded up several different kinds of cards. I knew she had friends and family who all had different interests. I would take each card and describe in detail the front of the card, then I would read the verse inside. After thinking it over Grandma would tell me who she thought would like each card.

After a while, I looked up and I noticed that we had several nursing home residents standing in the doorway. I started to notice as I read each card, the look on their faces and Grandma Z's face, too. Each one had a faint smile and a faraway look in their eyes, as they were seeing the scenes in their minds' eye.

I thought when I went over to do the Christmas cards I would be doing Grandma Z. a favor, but it turned out that she did me a big favor. I'll always cherish this special memory of bringing some Christmas joy and pleasant memories to Grandma and her fellow residents.

Thanks to Grandma Z. I made a "good memory" that I'm now passing on to you. 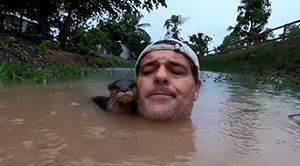 Man Is Greeted By An Otter Pup In The Water