Beloved Turned In To Sister 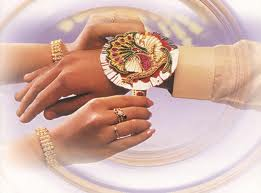 Those were the days when I used to be the student of 8th standard.

I was deeply attracted by one of my classmates named Lavanya.

She was a fair,medium height,cute girl with long black hair.

she was blessed with a pair of beutiful blue eyes as deep as ocean.

troublesome guy of the class, though I was the big time admirer of

her beuty or in other words I had my first crush on her. But my

inclination towards her beuty was known to no one else but me only.

feelings for her to anyone of my friend till I was grown up.

festival of Rakshabandhan a day before the actual festival is

celebrated throught the country. Let me give you a little overview

that Raksha bandhan is a holy festival celebrated by the hindu

them life term security from sin,evil or bad things.

So, All the girls were told to bring silicon threads and boys to bring

chocolates, sweets or gifts to offer to there so called sisters. and

post lunch the holy ritual started. All the girls were standing in one line holding

to girls queue with goodies in there hands. I was also standing in same queue

new so called sister this year. I was not able to hold my eyes off Lavanya as she

was looking extremely gorgeous in pink salwar suit and standing in the girls queue.

imagined even in the worst of my dreams, no one else but one of the cuttest girls

of school, my first crush, my secret love , Lavanya was the one who was in the

for rest of the life. I had no option but to carry on with ritual as I did not want to make

any bad impression infront of the entire teaching staff. Unwillingly I had to forward

is how a love story ended even before it started.

But how can I be such a fool. I used to be good in mathematics and I could have

easly changed my position. My mathematical skills might have brought a lot of

success in my life but could not save my love to let sacrifice for this bizzare tradition.

planet. And this is How a beloved turned out to be a sister...