When I made the choice to become a Christian, I told the Lord I wanted to be "available" whenever and wherever He needed me. Being "available" has taken me to some unusual places.

One such place was an old, white-framed, two-story, nursing home. Every Thursday evening at 7:00 I would find myself "available" to visit at this nursing home. I always brought a basket full of wrapped regular and sugar free candy each time I came to visit. I walked in every room and greeted each person. Most people were friendly and very happy to see me. Others were gruff, and acted like they weren't sure what to think of me. One elderly man was in this latter category. Henry would hardly look up when I walked in. In fact, he seemed almost irritated that I stopped by.

Every Thursday evening I would hesitate outside of Henry's door thinking, "Lord, do I really need to go in here? This man doesn't even like me!" Every week the Lord seemed to say, "Go in."

I had gotten started later than usual this particular Thursday evening when I walked up to Henry's room. I peeked in, hoping he was asleep, so I wouldn't need to feel like I was bothering him.

Just my luck, Henry was sitting on the edge of the bed. "Oh joy, I guess I should go in and get rejected again," I thought. To my surprise Henry glanced up at me and said in his usual gruff manner, "Will you help me?" I was startled by the question. "Yes, I'll help you. What do you need?" I responded.

Henry lifted his head and looked me straight in the eyes. I could see that he was a proud man who had probably had a hard life. I was sure he had always taken care of himself. Asking for help would have been out of the question. He didn't want to ask for help, but now he was old and feeble and needed it.

"What can I do to help you?" I asked. He pointed to some old pajamas. In a voice that was gruff, but soft he said, "Would you help me put these on?" as he glanced at the pajamas. "I would be happy to." I responded.

I did my best to help Henry slip his thin arms in the pajama top. The material was so thin that I could almost see my skin though them. I carefully lined up the buttons to the holes and buttoned each of them. I gently straightened the wrinkled collar so it was in place. All the while, Henry sat very still and remained silent.

As I picked up the pajama bottom I found myself kneeling in front of Henry. I felt a strange sense of peace as Henry lifted each of his feet so that I could slip the pajama leg on. I noticed how difficult it was for Henry, even with my help, to put them on.

With my mission complete I stood up to leave. Henry slowly lifted his head. When his sad eyes met mine he whispered, "Thank you." I felt tears filling to my eyes. I bent down and gave him a small hug and whispered, "You're welcome." 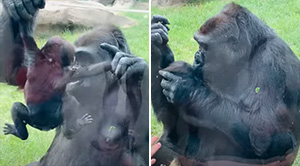