This couple thought they would have some fun this Halloween by conducting an experiment.

They offered trick-or-treaters the option of choosing candy or a potato. 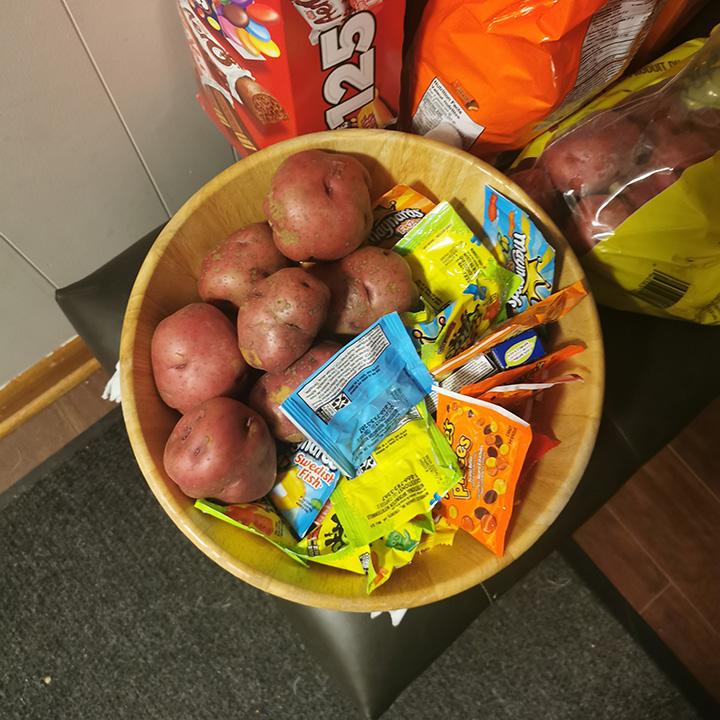 The couple posted the results of the experiment on Reddit. This is what they wrote:

When approaching this experiment we were hoping participants would choose potatoes, but we had anticipated a higher candy preference.

To avoid bias during our pitch 'so you guys can choose either a potato or candy tonight!' I tried my best not to emphasize or exaggerate my voice when saying 'potato' or 'candy,' although my excitement for potatoes occasionally won out in my inflection, this did not seem to tip the scale one way or another.

However, we found it difficult to suppress our excitement when someone did choose a potato, which could influence the choices of other participants in a group setting. If we wanted to remain unbiased next year, we will work on our reactions. (More on which way we intend to skew the results to follow in the post report write-up).

The single most memorable moment was a super young girl who without expression change or pause in thought, chose 'potato', thanked me without change in emotion, and walked away. It was almost this was a choice that required no thought or consideration of the alternative.

Other potato participants would get super excited about their choice in potato and we could hear them talking about the experience as they walked away excitedly with their group. 'I got a potato!' One screamed in excitement. 'Guess what I got mommy!' Another laughed. One group even came back for another potato a piece, which we decided to oblige. (So two extra potatoes were given out to the same participants, but we felt a potato given away was a potato given away for this experiment)

The adults who participated with the children during trick or treat all expressed joyful confusion in the choice, and thought out-loud about choosing a potato, and the benefits of a potato over candy. (Nutrition, price, utility, sheer uniqueness, etc.). However all the adults ended up choosing candy after an internal debate. It was almost like some part of them would not let themselves to deviate from the norm of Halloween. For the adults who were by their children not trick or treating, they would often immediately voice their preference for their child to choose the potato, often to no success.

Buyer's remorse, or people regretting their decision, was only observed with some candy choices. As they walked away, some of the participants would openly discuss the thought that they should have gotten the potato. For those who chose the potato it was clear they walked away with a happy story they could proudly tell their friends and family later. (Except for that mysterious little girl). It should be noted that there were also a small number of participants who would walk away commenting on why anyone would choose a potato.

Since my partner and I make art full time to bring out the inner child, this year was a great benchmark to see what a 'un-biased' approach to potato vs candy would yeild.

For 2023 we will try to skew the results to more potato choices utilizing all of our artistic, promotion, branding, and sales experience. This would include signage, lighting, art, a potato mascot, and whatever decorations we think of by next year's Halloween to skew the choice preference to potatoes.

Voice emphasism would be allowed for 'potato', and we would improve the script to help sell the potatoes.

The only rules would be that at the door, the participant could only choose either a potato, or candy.

We hope that the glimpse into the fun and silliness we saw at Halloween this year will be even more lasting in 2023, and perhaps start a new fun trend for Halloween."