Goose Flying Upside Down Is Simply Showing Off, Say Experts

A photo of a bean goose flying upside down has sparked a heated debate as to why geese do this.

Photographer Vincent Cornelissen said he's received thousands of messages and comments from people around the world asking for information about the goose flying upside down. 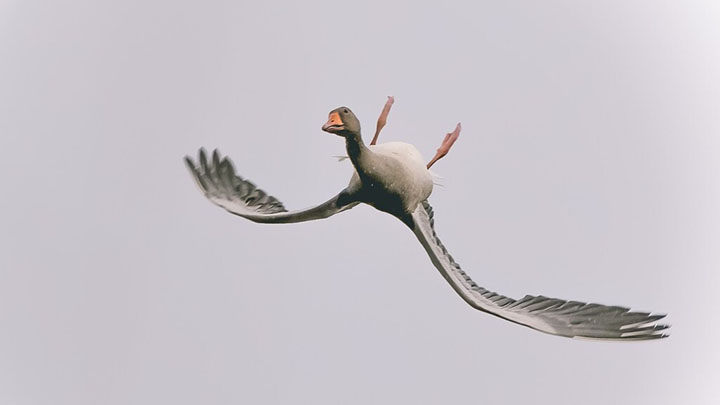 Cornelissen captured the photo near the Dutch town of Arnhem while snapping photos of three geese.

"I saw that one of the three had trouble flying in a straight line. He was having a hard time which I thought was because of the wind. He seemed to be struggling, so I took some pictures of him," he said.

He didn’t think much more about it until he developed the pictures.

"I immediately realized that I had captured something special, but at the same time, I was afraid that no one would believe me. The image looked like it was edited in Photoshop."

The bizarre flying behavior has many nicknames — including barrel rolling — but the official description is "whiffling".

"Whiffling is a term used in ornithology to describe the behavior whereby a bird rapidly descends with a zigzagging, side-slipping motion," the Wikipedia description reads. "Sometimes to whiffle, a bird flies briefly with its body turned upside down but with its neck and head twisted 180 degrees around in a normal position. The aerodynamics (that) usually give a bird lift during flying are thereby inverted, and the bird briefly plummets toward the ground before this is quickly reversed and the bird adopts a normal flying orientation."

"Once young geese have mastered flying, they start to see what is possible and how far they can go," Soerink said.

But he also said it could just as easily be that "they do it to brag to their peers. Like, look at me!"