A Russian icebreaker ship named Moskva gained international attention in 1985 when she led thousands of entrapped beluga whales back to the open sea -- by playing classical music. 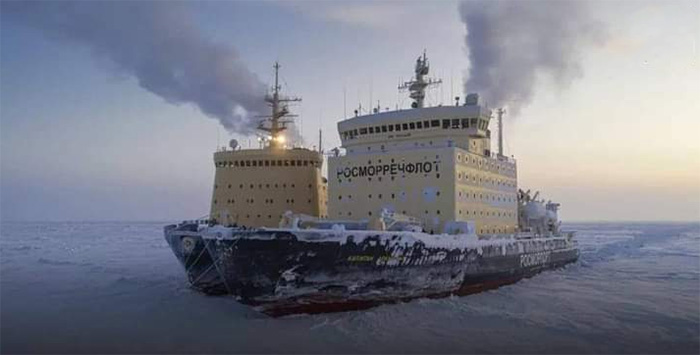 In late December 1984, a herd of up to 3,000 beluga whales was discovered in the ice-covered waters off the Chukchi Peninsula. The whales were struggling for breathing room in small pools of open water.

The white whales had evidently chased a large shoal of cod into the Senyavin Strait. An easterly wind kicked up and jammed the narrow strait with drift ice, leaving only small pools of open water for the white whales to surface for breathing.

Finally the decision was made to summon the Moskva.

Moskva raced against time and dropping temperatures to reach the whales before they ran out of breathing pools or starved to death. Upon arrival, the ice was so thick that the captain called the mission off. However, after dozens of whales started to perish, Moskva loaded on a full tank of fuel and plunged into the ice.

After a couple of days, Moskva finally reached the whales, but a new problem emerged. They had to figure out how to get the beluga whales to follow the ship before the ice closed up behind her.

One person on the vessel recalled that marine mammals react to music.

"Nobody could tell the captain how, in effect, to perform the most responsible stage of the operation – in what language, so to speak, to talk to the polar dolphins," wrote the Government newspaper Izvestia. "This operation was truly experimental."

And so music began to pour off the top deck. They played all types of music at first.

However, when the crew began playing classical music through the ship's loudspeakers, the whales started to follow Moskva.

"They began coming up to the ship themselves," Izvestia reported. "They hemmed it about from all sides. They were happy as children, jumping, spreading out all over the ice field."

The rescue mission was dubbed "Operation Beluga" and cost the Soviet government about $80,000.