A man in India set an unusual world record by spending 72 hours in a cage with the country's most venomous snakes. 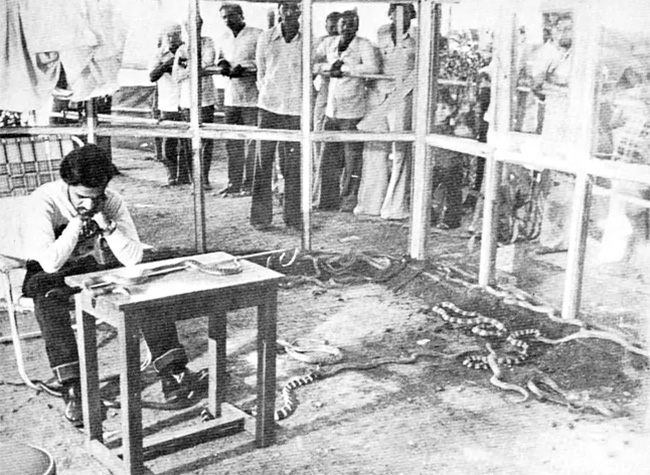 Khaire's love for snakes began while working as as a receptionist at a five-star hotel near Bombay.

"Reptiles were frequent visitors at my place in Matheran," Khaire recalled. "I hated killing such beautiful creatures - most of them were harmless. So I started catching and releasing them in the Sahyadri hills. I once caught a snake and took it to the Haffkin Institute in Bombay. I was told that it was poisonous and too risky to be carried in this way. The incident boosted my courage and so began my obsession with snakes."

Khaire said he first thought of establishing a world record when he came across reports of Peter Snyemaris staying with 18 venomous and six semi-poisonous snakes in Johannesburg, South Africa, for 50 hours.

"I thought an Indian deserved to create a world record in this field as India is known abroad as a country of snakes," said Khaire.

So, for three days, Khaire lived in a small glass cabin filled with venomous snakes at B.J. Medical College in Pune, India.

While resting in a chair, he often had to contend with snakes that climbed onto him. But after 72 hours, Khaire left the cabin without a single bite.

Using the initial funds from the proceeds of his feat, Khaire created The Katraj Snake Park that was later to be known as The Rajiv Gandhi Zoological Park. This unique park helps nests approximately 160 species of snakes and reptiles.