A man with special needs is recovering in the hospital thanks to a group of good Samaritans. 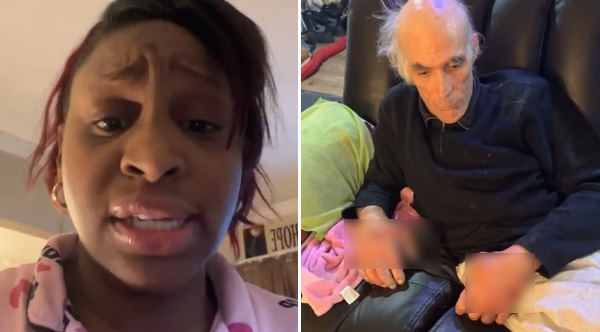 Sha'Kyra Aughtry was at her home in Buffalo, NY, on Christmas Day when she heard someone screaming on her street. When she looked outside, she saw a man calling for help in the frigid cold.

She brought the man, 64-year-old Joe White, into her home to warm up but she feared it was too late. His hands had frostbite and his body was looking worse and worse the longer he stayed in her home.

In a desperate plea for help, Aughtry took to Facebook Live.

"We gotta get some help," she said on the livestream. "He has gangrene on his hands. He's going to lose his fingers. I don't know what else to do. I have fed him. I have bathed him."

"I'm going crazy because I'm scared. I'm starting to see his body change too much from the time that I had him – his body has changed rapidly every hour."

Aughtry said she called 911 and the National Guard but, due to the blizzard, emergency responders were unable to respond to calls for hours over the weekend. Ambulances were getting stuck in the thick snow.

Eventually, her pleas were answered.

A group of men arrived and took Joe to the hospital on Christmas night.

"I'm in the car with him and some nice Samaritans that came and snowplowed us out," she said in another Facebook livestream .

Joe is now recovering in the ICU with fourth-degree frostbite, his sister Yvonne White told CNN.

Yvonne said her older brother is developmentally disabled and lives in a group home. His employer, Ray Barker, said Joe left his group home on Christmas Eve morning during the snowstorm. Barker thinks he may have been trying to make it to work at North Park Theater, even though he had the day off. Joe has been working at the theater since 1980.

Yvonne and Barker have both expressed their gratitude for Aughtry.

"We were all trying to help each other and it was wonderful," Yvonne told CNN. "And now I feel like I have a sister and three nephews," she added, referring to Aughtry and her sons."

"He was in a mess. And (Aughtry) clearly saved his life," said Barker.

The theater started fundraisers for Aughtry and for White, which have together raised over $50,000.