A photo of a Kentucky coal miner with his family at a college basketball game is going viral.

The photo shows Michael McGuire and his son sitting in the stands at the University of Kentucky Wildcats game on Saturday. McGuire is still wearing his work uniform and his face and arms are covered in black coal dust.

Kentucky's head coach John Calipari posted the picture and expressed admiration for McGuire's hard work and dedication to his son.

"My family's American dream started in a Clarksburg, WV coal mine, so this picture hits home," Calipari wrote.

"From what I've been told, after his shift, he raced to be with his son & watch our team. Don't know who this is, but I have tickets for him & his family at Rupp to be treated as VIPs!!"

McGuire had not yet been identified at that point, but Kentucky fans quickly found him and connected the coach with the family.

McGuire's wife, Mollie, replied on social media with a photo she had taken at the game. 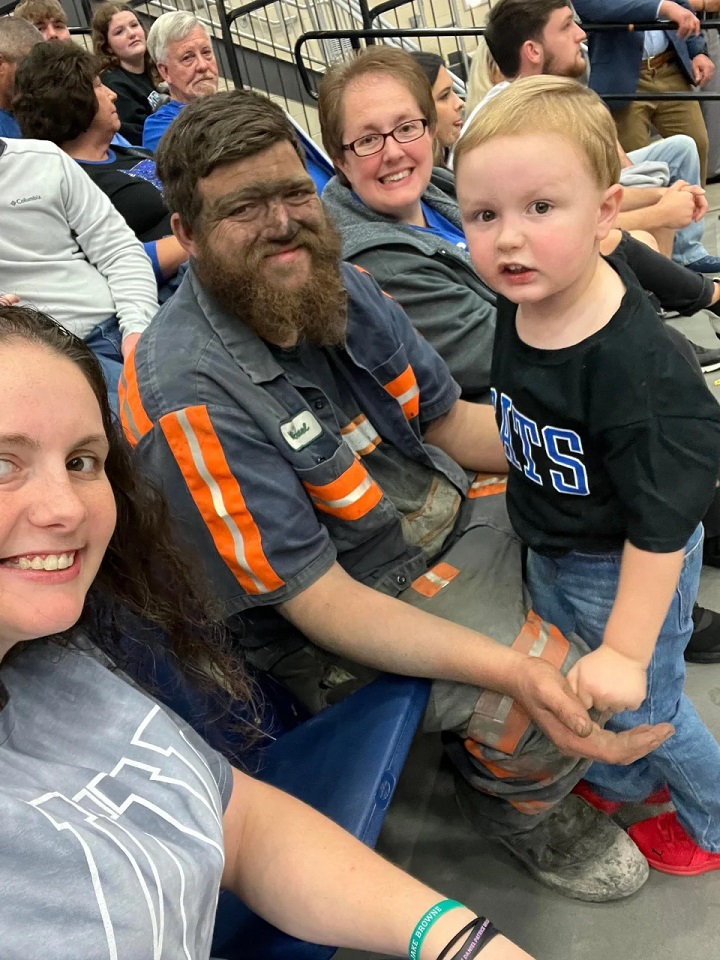 She wrote: "My amazing husband started his day at 4:45am that morning and worked all day. Then drove straight to the arena to meet us and enjoy the game with our son! We are truly blessed with such an amaznig man, and beyond thankful! We love our coal miner."

McGuire told local station WKYT that he didn't want to miss his son Easton's first basketball experience. He said Easton had a blast.

"He was dancing and every time they would slam dunk it, he would go crazy," he said.

Coach Calipari said he hopes McGuire will be a lesson for his players.

"I talked to my guys about it. It's just a great lesson, and I showed ‘em the picture yesterday of Michael and his son, and I talked about hard, backbreaking work that's honorable work, but that he makes time for his son, even when he knew he couldn't shower. It didn't matter what he looked like, he just wanted to be with his son," Calipari said.

The McGuires haven't decided which game they will go to, but Calipari said that hotels, restaurants and other local businesses are tripping over themselves to do something nice for them when they come to town.

"Isn't it neat for someone like that, who is a quiet, humble guy to know people appreciate you, and we appreciate what you stand for," Calipari told reporters. "And I appreciate it because it's how my family got their start in this country."