'I Just Give From My Heart': Dolly Parton Receives Philanthropy Award

Dolly Parton was one of six honorees to receive the Carnegie Medal of Philanthropy on Thursday night at Gotham Hall in New York.

She was celebrated along with Dallas entrepreneur Lyda Hill, Kenyan industrialist Manu Chandaria, Lynn and Stacy Schusterman from the Oklahoma investment family and World Central Kitchen for their extraordinary contributions that make the world a better place. 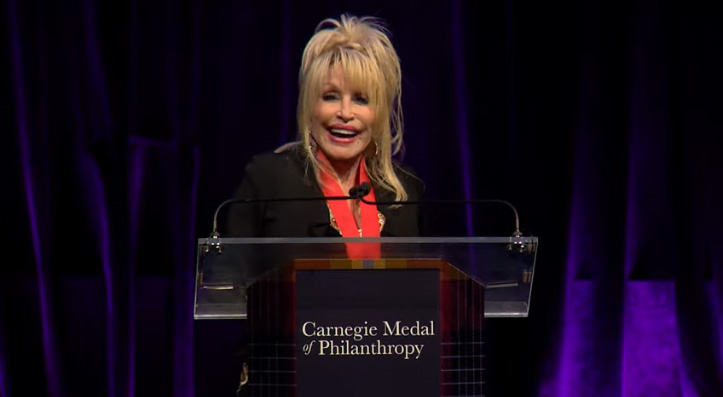 It has recently been revealed that Dolly Parton has been quietly paying for the band uniforms of many Tennessee high schools for years. She used the songwriting royalties she earned from Whitney Houston's version of "I Will Always Love You” to purchase a strip mall in Nashville to support the surrounding black community in Houston's honor.

Her "Imagination Library" initiative provides children under age 5 a free book every month. The Library is dedicated to inspiring a love of reading through funding shared by Dolly Parton and local community partners in the United States, Canada, United Kingdom, Australia and Republic of Ireland. Currently, Parton sends out about 2 million free books each month.

Parton has also made many large donations to disaster relief. In 2021, she raised $700,000 to help residents impacted by the catastrophic flooding in Middle Tennessee.

In her Carnegie Medal of Philanthropy speech, Parton said she doesn't really have a strategy for her donations.

Eric Isaacs, president of the Carnegie Institution for Science said Parton is a "tremendous example” of someone who understands the importance of philanthropy.

"Everyone knows her music," he said. "They might know Dollywood for entertainment, more broadly. But now they're going to know her for her philanthropy, which I'm not sure they have before."

This year, Parton also launched the Care More initiative at her Dollywood Parks and Resorts, which gives employees a day off to volunteer at a nonprofit of their choice.

"I think it's important for everyone to do their share to help their fellow man," she said. "This world is so crazy. I don't think we even know what we're doing to each other and to this world."

Parton says she hopes the day of service will let people realize that "when you help somebody, it helps them, but it can help you more."

"That's what we should do as human beings,” she said. "I never quite understood why we have to let religion and politics and things like that stand in the way of just being good human beings. I think it's important from that standpoint just to feel like you're doing your part, doing something decent and good and right.”