A Blind, Older Dog Is Found Alive In Alaska, 3 Weeks After Wandering Off

An Alaska family had given up hope of finding their blind, elderly golden retriever who wandered away from their home three weeks ago, but a construction crew found Lulu in salmonberry bushes after initially confusing her for a bear. 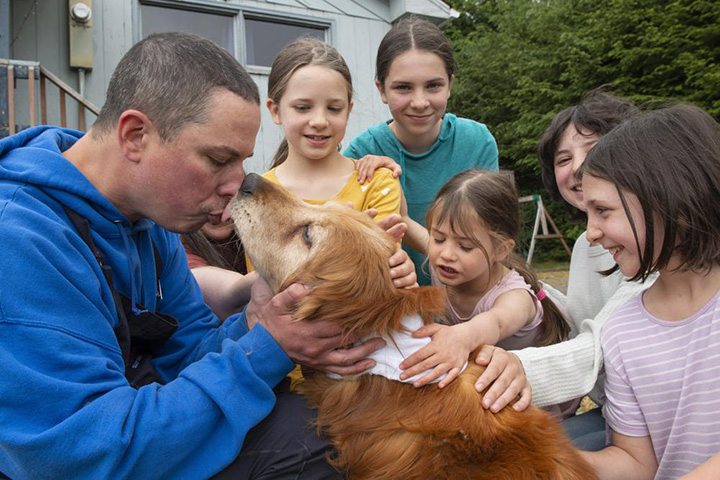 Lulu was barely alive after being found Tuesday, but she is being nursed back to health and is back home with her family, the Daily Sitka Sentinel reported.

"She means everything," owner Ted Kubacki said. "I have five daughters and they're 4 to 13 years old, so they've spent every day of their life with that dog."

The Kubacki family searched for weeks after Lulu wandered off on June 18.

"She's just so helpless, and you kind of imagined that she can't get real far because she can't see," he said.

It didn't help when the family was the subject of a terrible joke when someone claimed they found Lulu a few days into the search.

"We put the kids to bed and got a text saying, 'We found your dog,' or 'I have your dog,' and we're like, 'Oh my god, this is incredible'," he said. "Then the person texted me, 'Just kidding.' This happened, yeah, that was all part of this terrible story."

After searching weeks, the family had given up hope.

But then a construction crew this week spotted Lulu lying in the brush alongside a road not far from the Kubacki's home. She was about 15 feet  down an embankment, and at first the crew thought it was a bear.

"They got a closer look and they realized that it was a dog, and they got her out of there," Kubacki said.

All the sadness melted away when he got the call that Lulu had been found.

"I called my wife from work and it was just screaming... She just starts yelling, then she yells to the kids. And I just hear them screaming like crazy," Kubacki said.

Although alive, Lulu was in bad shape. The 80-pound dog had dropped 23 pounds since she was lost; she was dehydrated, dirty and her fur was matted.

"I just expected to come back and be like 'Hey, here's my dog.' She's going to jump up and wag her tail and kiss my face, and she couldn't even pick up her head," he said. "She'd been through the wringer."

"Slowly but surely she started eating and she was kind of able to pick her head up," Kubacki said. "But then yesterday, she propped herself up on her front paws by herself, like nestled into me and gave me a kiss and wagged her tail and it was just so great."

A day later, she was able to stand on her own.

Kubacki, a grocery store employee and the sole provider for his family of seven, then worried about the veterinarian's bill.

Those fears were unfounded as Sitka residents donated hundreds of dollars to cover Lulu's recuperation bills.

"We have our family member home," Kubacki said.