In the fight against plastic pollution, a new drone offers an intelligent tool for cleaning water in lakes, ponds, marinas, rivers, and more, where the eco-friendly robot can devour plastic pollution before it spills into the ocean. 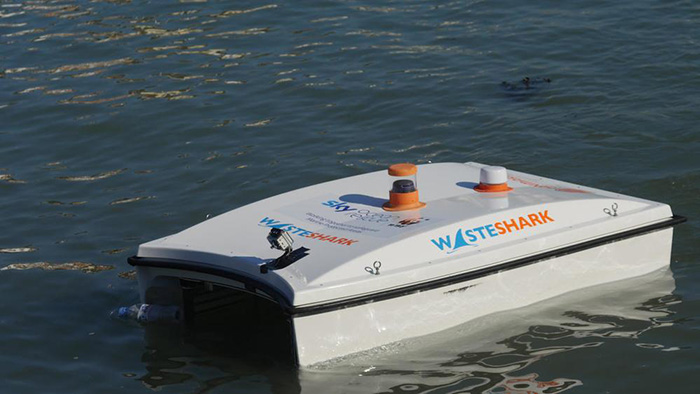 RanMarine Technology's WasteShark is a drone that swims rather than flies. It collects litter, biomass, plastics, microplastic and other debris using a basket underneath the autonomous device.

The WasteShark can roam for up to eight hours on a single charge and hold up to 43 gallons of trash. It's programmed with GPS points to ensure that it covers hotspots where waste gathers, and its path can be programmed and monitored remotely.

Modeled on the planet's largest fish, the whale shark, the WasteShark is the world's first waste-harvesting autonomous aqua-drone that collects marine waste, biomass, and plastic from all types of water.

To date, RanMarine has introduced WasteSharks to help clean up harbors in the United States, the United Kingdom, the Netherlands, South Africa, India, Thailand, Denmark, Sweden, the United Arab Emirates, and Australia.

"Once plastic or trash ends up in the ocean, it's very hard to collect because it does break down. And so it gets smaller and smaller and it's just hard to get out to our big open oceans and collect the trash there," said Nancy Wallace, director of the U.S. National Oceanic and Atmospheric Administration's (NOAA) Marine Debris Program.

"We'd much rather collect that trash closer to shore, which is easier, it's less costly."

Watch the video of the WasteShark in action.