A Texas police chief took the opportunity to boast about his staff after they helped deliver a new refrigerator and groceries to an elderly resident in need. 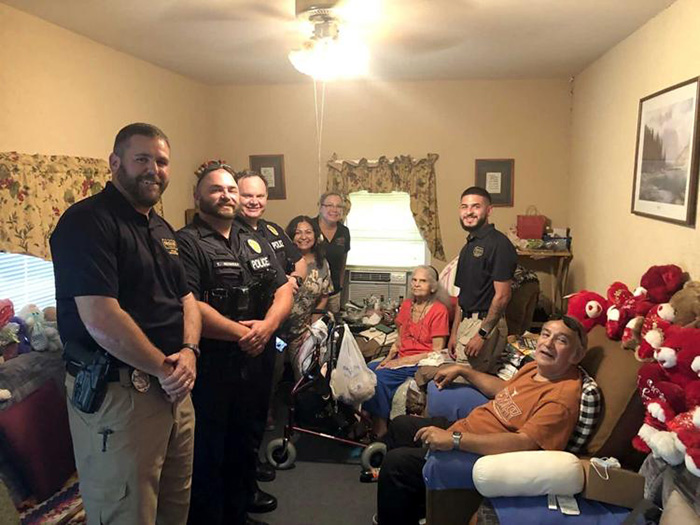 Seguin Police Officer Dustin Kincade recently visited a home after the department received a call asking for officers to check on the woman. When Kincade arrived, he talked to the woman and listened to some of her troubles.

"I was just talking to her a little bit and she told me her refrigerator went out, she's on a fixed income and she didn't know how she would get it fixed or get a new one and afford to buy food," he told the Seguin Gazette. "It was one of those one or the other type of things."

Kincade put the call out to his department, who rose above the challenge.

"I am blown away from the response that I got from my fellow officers and co-workers at the Seguin Police Department," he said. "I thought, we'd start getting the ball rolling on this and maybe by next week, we can get her a refrigerator and some food or something like that. Before the end of the day, we already had a refrigerator and enough money to buy some groceries."

Chief Terry Nichols took to Facebook to "brag" about his staff.

"Opportunity to brag....by a proud Chief!" he said. "There are too many SPD employees, both sworn and non-sworn who gave their personal time and money to help out this lovely lady who needed a hand to name. However, those in this photo were there to deliver the refrigerator and fresh food on 7/15 to a very grateful resident. Thank you Officer Kincaid for stepping up and organizing this generous effort."

Kincade also plans to keep in touch with the woman, whom he has befriended.

"She doesn't have very many people to talk to, so I'm going to try to go and visit with her at least once a week. I would definitely say we forged a friendship and it didn't take long either," he said.