A woman in Allentown, Pennsylvania, found her missing dog while looking for a new pet to adopt. 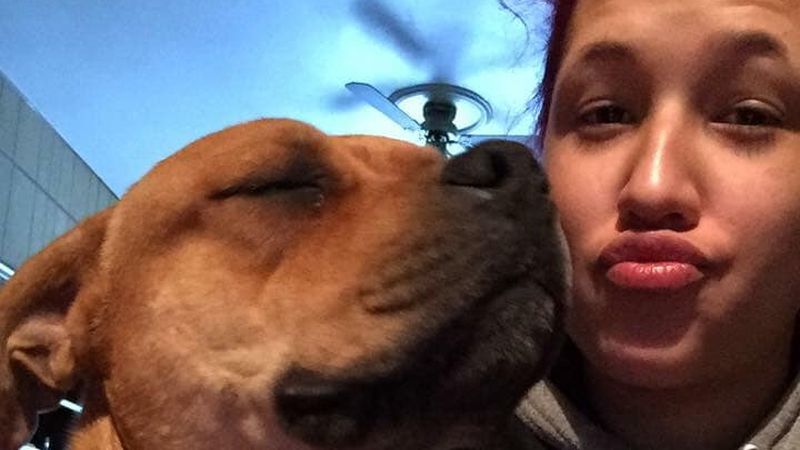 Aisha Nieves was recently scrolling through pictures of dogs for adoption on the Lehigh County Humane Society's (LCHS) adoption website in hopes to find a new companion for her family.

"I happened to be on the Lehigh County Humane Society adoption site, looking through pictures, when my phone just froze on this one picture and I just stared," she told The Morning Call.

The picture was of a tan pitbull-rottweiler mix -- the same beloved dog she lost over two years ago.

"I thought, 'Wait, that can't be him'," Nieves told The Morning Call. "Then, I saw the little scar over one eye, the scar from when he got caught in a gate, and I was like, 'Oh my God, that's my baby, that's Kovu!'"

Nieves said Kovu went missing back in May 2019 after a truck hit her fence and he escaped.

Weeks later, he was found by the LCHS in bad health. He was in the shelter for about four months and then adopted out to a new family.

However, Kovu was returned to the shelter earlier this month because the family who adopted him was facing eviction. The family named him Ash.

"I called the Humane Society and told them 'Ash' is my dog, Kofu, who's been missing for two years," Nieves said. "I told them, 'I'm on my way to get him right now, what do I need to bring?'"

Nieves was initially worried Kovu wouldn't remember her, but it was like the pair have never been apart.

"He was screaming, trying to get away from the guy holding him and run to me. Then, he just jumped on me, and we started kissing and hugging. He sat on my lap. I told him, 'Yeah, buddy, you're going home. I'm so sorry this happened. Never again am I losing you.'"

Watch the emotional reunion below.