After Losing His Eye In A Suicide Attempt, Drew Robinson Hits His First Homerun

Drew Robinson is playing professional baseball with one eye -- and he's capable of hitting home runs. 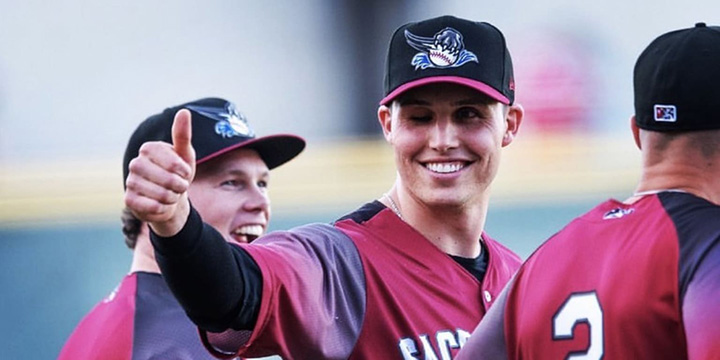 13 months ago, 29-year-old Drew Robinson lost his right eye in a suicide attempt. When he woke up from that attempt, he realized he was still alive he called 911.

On Tuesday, the River Cats outfielder hit a solo homerun in Sacramento's 10-7 loss to the Las Vegas Aviators.

"Chills. Tears of every emotion in the book while rounding the bases," Robinson wrote on social media.

The moment every baseball fan has been waiting for: a Drew Robinson bomb! 💣 @Drewrobbb

Robinson finished the game 2-for-3 with a walk. He started the season by going hitless in eight at-bats but is showing he's still got the abilities that got him to the majors four years ago.

Robinson's failure in the majors was just one part of his mental health issues. In February, he shared his story with the public with the help of reporter Jeff Passan at ESPN.

"Robinson's suicide attempt wasn't a snap decision. According to Passan's reporting, Robinson had struggled with his mental health for years, and his help-seeking efforts didn't alleviate his depression and suicidal ideation.

The COVID-19 pandemic compounded the situation. The baseball world came to a standstill on March 12, and Robinson retreated to isolation at his house in Las Vegas. He had just called off his wedding with his fiancée, Daiana, as he doubted his ability to get back to the Majors after signing a Minor League deal with the Giants in January and didn't want to continue to put her through the difficulties and hardships associated with that life.

Robinson picked up a handgun from a local store on March 30. 16 days later, he decided to go through with it."

Robinson lost his eye, but recovered the will to live and kept his passion for playing baseball. He hopes his story will inspire someone else, no matter their predicament, to keep going.

"I'm just proof that if you focus on the right perspectives and you focus on the right things, you'll see hints of pure joy for life," Drew told ESPN. "And I think it's a beautiful thing, and it's a powerful thing. No matter how bad things seem at that time, it's not as important as the next day, the next minute, of making that change to help yourself."