The manager of a department store in British Columbia surprised a mother and her son with a giant teddy bear after he overheard Mom tell her son she couldn't buy the bear. 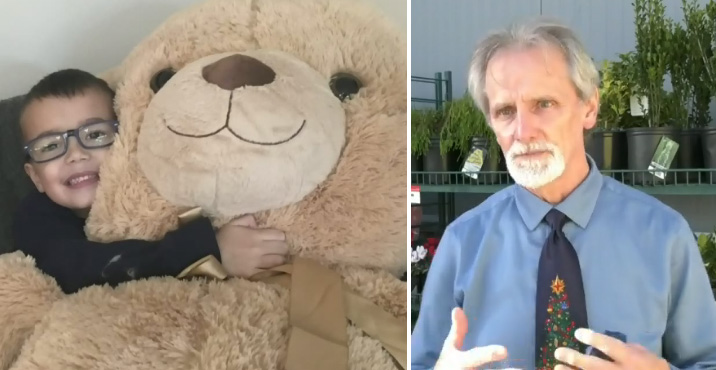 Karmalee and her 4-year-old son Quinn were shopping for Christmas lights at the Canadian Tire in North Saanich when Quinn noticed the teddy bear on display.

"He was like, 'Wow! Look at that! I need that bear!'" Karmalee told CTV News.

Quinn was bouncing up and down in excitement which caught the attention of the store's manager, Dave.

"(His mom) said, 'We can't (get the bear) right now'. And the boy said, 'Okay. I understand, mom'," Dave recalled, noting that the boy didn't whine or complain. "That just blew me away. He's four years old."

Dave returned to work, but he couldn't stop thinking about them. It prompted him to consider his young granddaughter in Ontario, who he's been missing during the pandemic, and remember those past Christmas times when he was a single dad.

"I raised my son from the time he was six days old," Dave explained. "I know what I went through and people gave me help."

So, he tracked-down Karmalee and quietly asked her if he could buy the bear for Quinn.

"I started tearing up," KarmaLee said.

"Christmas is going to look a lot different this year and you just try to make it as magical as you can for your kids," she added. "And this guy did that. It's pure magic."

Dave's co-workers say it's just pure Dave; that he often acts on his impulse to be kind.

"You don't know what's going to happen tomorrow to any of us. If you can do something good for somebody, do it," Dave said. "You'd be surprised how it makes you feel."

Quinn has since thanked Dave for the gift by giving him a card with a drawing of the bear.