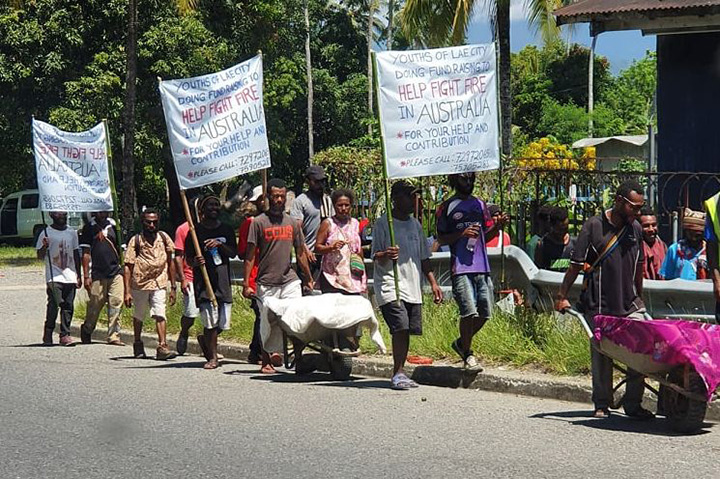 When Andy Thorp heard his rotary club in the seaside town of Merimbula was being sent a donation from people in Papua New Guinea to help bushfire victims, he was shocked to learn of the amount.

"I thought there might be anything from a couple of hundred dollars to $1,000. But I was wildly wrong," Thorp told ABC News.

Merimbula is one of many towns on the New South Wales east coast that is still recovering months after the devastating bushfires in Australia earlier this year.

In Papua New Guinea's second-largest city, Lae, Sheila Harou saw photos of the destruction and was inspired to take action.

"We called out to all our Morobeans to be united in one heart, to give from the heart to console our neighbor," Harou said.

She started a bushfire appeal which saw young people take to the streets pushing wheelbarrows, asking for public donations, while more than 20 organizations also gave money.

"Youth groups, churches, businesses, schools, and corporate houses … they all participated and gave their contributions in cash and kind," Harou said.

The money was given to the Merimbula Rotary Club, which gave $50,000 to the Bega Valley Council.

The Rotary Club kept $11,000 for bushfire recovery projects in their town.

"To read that these people were donating what little they had, I cannot tell you how much this money means to me, not so much in dollar terms but the value in humanitarian terms, it's amazing," Bega Valley Council Shire Mayor Sharon Tapscott said.

Tapscott and Harou met virtually for the first time this week. They have promised to visit each other once border restrictions between the two countries are lifted.