A sheriff's deputy was spotted eating dinner with a homeless man in Lake City, Florida. 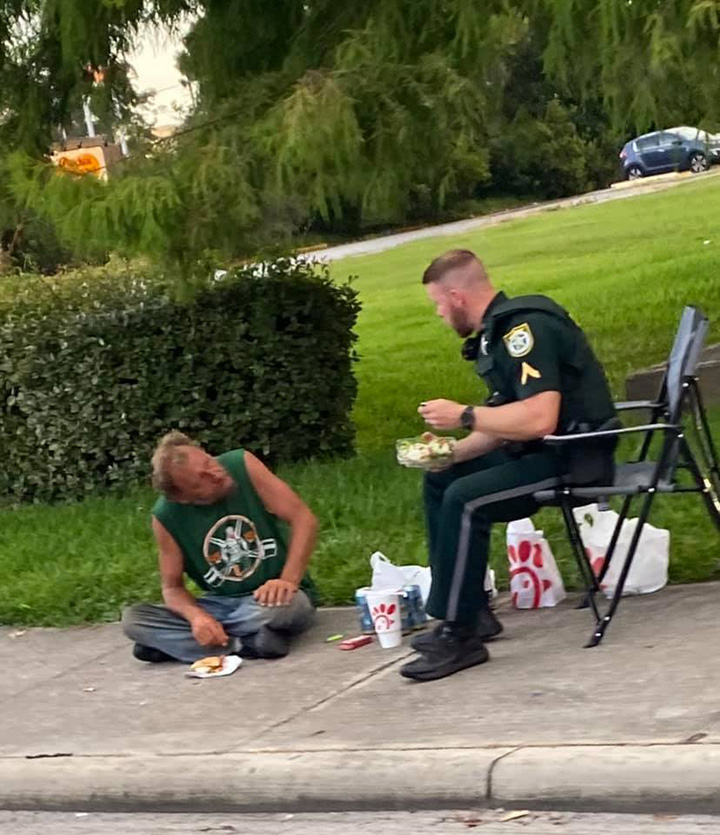 Brownie Lyons says she was driving through Lake City when she saw the officer exit his patrol vehicle and set up dinner on the sidewalk.

"My husband and I were at a drive thru near the place the officer stopped," Lyons told WCJB. "He pulled over and opened his back door and was getting something out of the back seat. It turned out to be the chair he's sitting in. We were wondering if he was going to talk to the guy about being on the street but when we pulled out, he had set up the food and was sitting down with him eating."

She snapped a quick photo and posted it to Facebook after feeling inspired to share the "feel good moment".

The officer was later identified as Corporal Shane Foote.

"Once I posted the picture, my son tagged the officer because they went to school together and my son said, 'That's Shane all day everyday!'" Lyons said. "I also noticed other people who know him personally commenting about what a great guy he is. I think our community in Lake City has a lot of good officers including Florida Highway Patrol, and I have personally witnessed this but unable to capture it until that day."

The Columbia County Sheriff Office said Foote's act of kindness serves as a great reminder that we are all in this together.

"So many times officers, paramedics, EMTs, and nurses like myself do a lot of good things according to our hearts to serve not for anything else," Lyons said. "It takes very little effort to show kindness. I try very hard every day no matter how I'm treated. A kind word or gesture goes a long way."