An anonymous donor gave everyone in the town of Earlham, Iowa, $150 worth of gift cards for food. 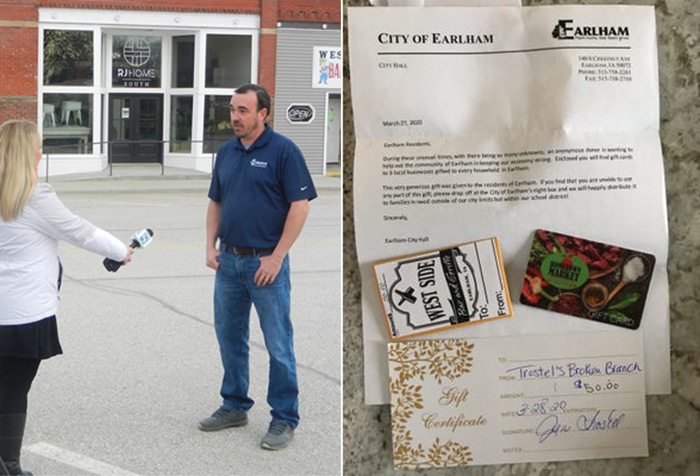 Earlham Mayor Jeff Lillie said he received a call from a friend who told him there was a donor interested in interjecting money into the town's economy.

At first, the donor, who did not reveal their identity to the mayor, said they would buy 100 gift cards from three local businesses. An hour later, his friend called Lillie again and said the donor was bumping the number up to 250. An hour after that, the number was raised to 500.

"I said to him, at 500, you're darn near giving a gift card to every single household in Earlham," Lillie said. "When I told him there were 549 households in town, he said 'Done.' And that was it. I was ecstatic because it made sure everyone would get a card."

The donor surprised the town by purchasing 549 gift cards from each of three local businesses: West Side Bar and Grille, Hometown Market, a grocery store, and Trostel's Broken Branch, a restaurant and coffee shop.

"It came at the end of a couple really hard weeks," Lillie told CNN.

"I remember going home and walking through the front door, and I couldn't speak for a minute. I was just crying like a baby, and my little boy saw me and wrapped around my leg and said, 'Daddy what's wrong?' And eventually I was able to choke it out: 'Buddy, right now, for once, nothing's wrong'." 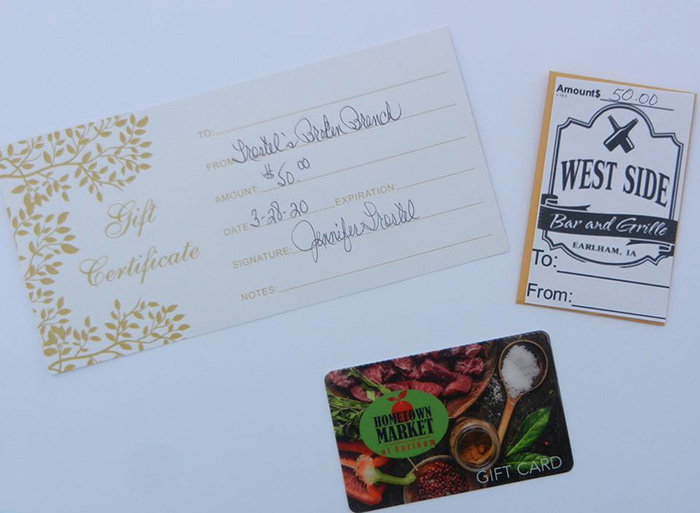 Jennifer Trostel, whose husband owns Trostel's Broken Branch, was shocked when Lillie called and told the restaurant to have 549 gift cards ready. The restaurant is so new they didn't have gift certificates yet – Trostel had to buy them on Amazon.

"You couldn't even believe what was happening," Trostel said. "You were so grateful you started to cry. You couldn't believe that people would actually want to help you in such a huge way that you can't even fathom that kind of help."

She said the restaurant hadn't hired a full staff yet and couldn't sustain offering takeout. She was worried about never being able to open the restaurant that had long been a dream of her and her husband's.

Any Earlham resident who doesn't need the gift cards can drop them off at a bill pay slot at City Hall. The cards will be distributed to families in the Earlham Community School District who need assistance.

"Nobody has a lot to smile about the last few weeks, and this is definitely something to smile about," Lillie said. "There's a lot of families that $150 isn't going to be a game changer, but it's still something to make you feel good that there's good people in the world that are doing good things. It gives you some hope."