James Harrison's extraordinary blood has saved the lives of more than 2 million babies. Today, he made his final blood donation.

Every two weeks for the past 61 years, Harrison has made a trip to the Red Cross blood bank in Central Coast, Australia.

The 81-year-old has a rare antibody in his bloodstream that is used to make a lifesaving medication called Anti-D, which infants need if they have an opposite blood type to their mother. If they don't have it the newborn could die.

Since learning about the antibody in his bloodstream in 1957, Harrison has made 1,173 blood donations. But, because of his age, today is the last time he'll do it, and if it wasn't up to the doctors, he'd keep on providing it. 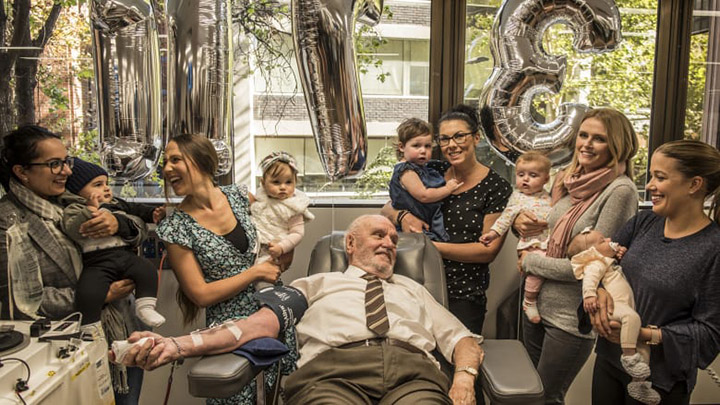 "It's a sad day for me. The end of a long run," Harrison told The Sydney Morning Herald.

"I've saved a lot of lives and brought a lot of new kids into the world. So that makes me feel good," he said.

Attempts to create a synthetic version of the antibody have so far failed. Australia's Anti-D program is wholly dependent on just 160 donors.

"Every ampule of Anti-D ever made in Australia has James in it," said Robyn Barlow, the Rh program coordinator who recruited James, the program's first donor.

"Since the very first mother received her dose at Royal Prince Alfred Hospital in 1967. It's an enormous thing ... He has saved millions of babies. I cry just thinking about it."

Harrison currently holds a Guinness world record for his efforts but he hopes that it will be broken - because that means another two million lives can be saved.