An Adventure In Floof 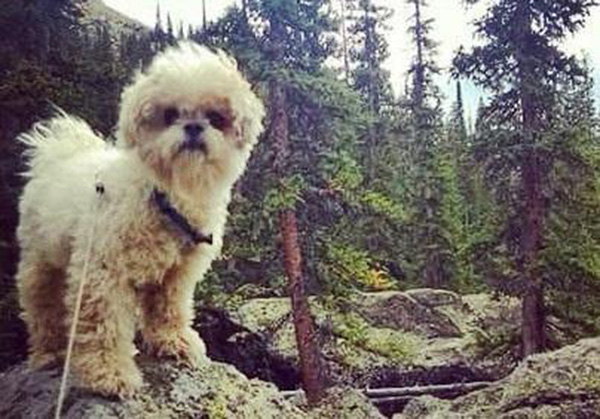 I never get to tell my floof story anymore, since she's gone now. But you 5 people will get to read it today. Someone suggested I post here, so we'll see what you guys think.

I was living in Denver near Sloans Lake and worked close to home, so I would regularly go home for lunch. One day, I'm taking a short cut through a neighborhood and reach the busy road, Colfax, that I had to cross. As I'm waiting this tiny cloud fluff bolts down the busy road and right past my car, dodging traffic with horns honking, it was chaos. The cloud is followed closely by a young girl in hot hot hot pursuit. Now, I'm a dog rescuer by fate, I have found, collected, and successfully returned about a dozen dogs to their fams. I've been bitten, scratched, had my car chewed up and pooped in, had some very ungrateful owners chew me out for disturbing them... but the dogs are happy so I'm happy.

Anyway, those dog-saving instincts tap me in so, I hop out and join the chase, “Is that your dog?!” I shout! What a stupid question, why would she be chasing a strangers dog. “No! Is it yours?” she asks... My question no longer feels so stupid. “No!” So on we run down the block and around the corner where we hit Sheridan, another VERY busy road, about 5 lanes across. The fluff darts into the road and is almost hit by a beetle, which gets rear ended for slamming on its brakes. A fender-bender. More horns. Further chaos. Traffic starts to back up almost instantly. A green pickup truck with a middle aged man inside stops right in front of me, having crossed oncoming traffic and half blocking the right lane and fully blocking the side road I stand on. He says, “Hop in, I can't still see it!” Traffic is getting worse, someone calls him an a**hole, pressure is building rapidly. This is NOT ideal.

A split second to think about my forthcoming decision. Should I jump into the truck of a complete stranger in order to save another complete strangers dog? What a terrible idea! I can't possibly do that, but now it feels like I'm in too deep, I just stop now? Walk away?! In front of all these people that 100% think this is MY dog now?

I know, I'll hop in the BED of the truck, so if he tries to kidnap me, I can just jump out. Genius.

So that's what I do.

Luckily, he does not try to kidnap me, but dodges some cars, cut off some other ones, does at least 11 illegal things in about 12 seconds and pulls over on the right side on the road, where we can see the floofer darting full speed across the field. He stops in traffic again and gestures, shouts something like “Blowdryer!” And I hop out. The other drivers have had enough of this nonsense. The air is thick with confusion and anger... but I digress.

I make a beeline toward the beeline on an intercept course. It panics at the sight of me, jukes me out, and jumps in the lake. Instant regret. Floofer is not a water dog, starts to swim away, panics, turns around, sees me, panics, turns around, sees open water, panics... See the pattern? It looks like a soggy, bug-eyed, cloud swimming in circles. The lake has a ledge, not a slope so it can't really get out in its own, and I'm wearing work clothes. Also, this lake is known for being a small, city ground water lake full of goose sh*t, and likely used needles from the crackhead corner a quarter mile from here.

Naturally, at this point, we've caused a great drama in the busy park. It's hard to miss the horns of a couple dozen angry drivers and people screaming 100 yards away. So a crowd starts to form as I take off my boots and go into the water. I pick up the goober and hand her off to a bystander, as another offers me his hand to pull me out. As I take the dog back soaking wet and shaking from panic and shock, she pooped on me. Ah, love.

At this point I realize that I left my car, running, with the door open and my purse on the front seat at least 4 blocks away. Across this busy road with no crosswalk or intersection nearby. It's starting to look like a 20-minutes walk back barefoot, soaking wet in my poop clothes. Green pickup truck guy is in the parking lot for the lake, waving his arms. That's some dedication to not kidnapping. We (the dog and I) get back in the bed, partly because of the kidnapping fear, but also because we now smell like, well, sh*t, more shit, swampy sh*t, and we're covered in sh*t from this sh*t dog and this sh*t lake in this sh*t park.

Remember the girl with the stupid question? Well she pulled my car over, turned it off, hid my purse and went on her merry way, thinking about the psycho that almost died trying to save some else's 8lb dipsh*t dog by jumping in the back of a strangers truck a quarter mile from crackhead central in a busy city. What a moron.

Anyway, I tried for months and never found an owner, so I named her Wicket and we lived happily ever after. My little adventure pup. She wasn't afraid of anything after that and she would have followed me right off the edge of a cliff without hesitation.