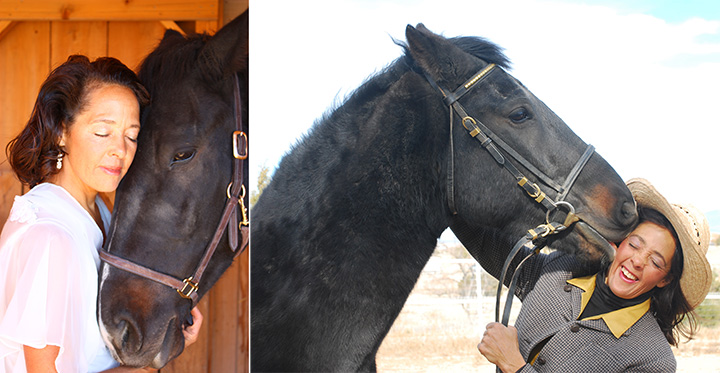 I would like to tell the story about the adopted mustang Calypso, who saved me from a terrible accident. I adopted Calypso from the BLM along with two mustangs, when I heard that the government had tens of thousands of wild horses in captivity. When I got the horses home, I began learning how to introduce wild horses to the human world. I had four domestic horses and they were a big positive influence, showing the new horses how to behave. It was wonderful to watch and I was learning as we went along discovering how to be with these new wild horses.

One afternoon, I was riding a domestic horse around the outside of a riding arena with Calypso, an adopted mustang, watching from inside. As my horse neared a corner with some bushes, my reliable riding horse panicked. He's big and strong and he was suddenly uncontrollable. He reared and spun around there was nothing I could do but try to settle him and stay in the saddle. It was a battle I was about to lose. But Calypso was watching intensely. Suddenly he burst into a furious run and came charging to the corner of the arena, where my horse refused to go. As Calypso came to a screeching halt just before crashing into the fence two pairs of glimmer eyes flashed at me before two huge wolves ran away.

I'm 65 now and I ride rarely but Calypso the mustang saved me and has a home with me for life.