Two grinning brothers, hair standing on end, were unaware that they were minutes away from being struck by lightning while climbing Moro Rock in California's Sequoia National Park. 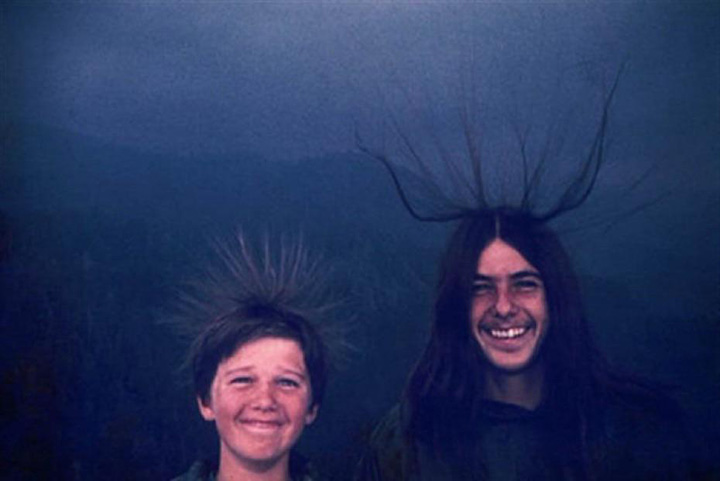 He and his siblings were hiking the granite dome. When they reached the top to enjoy the view, someone noticed that their hair was standing on end.

"At the time, we thought this was humorous," McQuilken recalled.

"I took a photo of Mary and Mary took a photo of Sean and me. I raised my right hand into the air and the ring I had on began to buzz so loudly that everyone could hear it," he told NBC News.

Suddenly, the temperature dropped dramatically and it began to hail. They decided to return back down the mountain, but partway down, the bolt struck.

All three siblings were knocked to the ground -- and all three survived.

As for the photo, it has been used for decades in brochures to warn campers about the potential for danger.

McQuilken, who is now in his 60s, says he still spends a lot of time outdoors but takes no chances with lightning.

What do you do in this situation?

According to experts, hair standing on end and tingling skin may be signs that a lightning strike is coming. If that happens, seek shelter immediately (NOT under a tree).

If shelter is not possible, squat low to the ground, making yourself the smallest target possible and minimize contact with the ground.