This Guy's Office Started A Cult Revolving Around A Magical Sausage

Do you believe in magical sausage?

This place of employment does and you might after reading the story. 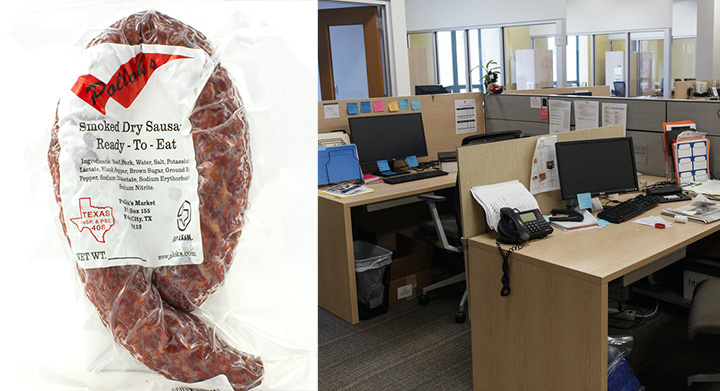 The bizarre story was shared on a Reddit forum by an employee who swears the sausage has magical powers.

Apparently, a smoked sausage given as a Christmas gift at an office party has magically granted people gainful employment. Consistently.

This is what the employee wrote:

"Back story of this sausage. It’s a smoked dry sausage in a vacuum bag called Pollocks Ready to Eat sausage. This magical item was initially given to a coworker before my time by my manager as a Christmas gift. He left it on his desk until a joke started that whomever holds the sausage is immune from the directors biweekly rage. We had a biweekly meeting in our department and the director loved roasting people.

Via voodoo and magic whomever possessed the sausage in their desk was spared from the directors sights. Eventually the whole department had a competition to be worthy of holding the sausage. This continued on until the true power of the sausage was revealed.

The original owner of the sausage departed to a better work place. The responsibility of protecting the sausage was passed onto a coworker via a sacred oath to affirm to the best of their ability to “preserve, protect, and defend the sausage from all threats both foreign and domestic”. After the oath he departed never to be seen again.

Fast forward 4 years, a total of 9 people have left with each leaving once they have been graced with the responsibility of holding the sausage.

Every. Single. One. Has had the sausage in their possession before finding a job elsewhere with significantly better pay and benefits.

I may have let the sausage down but the sausage had other plans. I had already applied to other jobs and not a day after discovering the sausage I got a job interview. Week later I am about to get an offer.

I am now preparing the ceremony of passing the sausage to my other coworker. May the sausage help others once my duty is done."

The odd, yet wholesome, story has been liked by more than 5,500 members of the forum.

"This is so wholesome. I freaking love it. Good luck at your new job!" one user commented.

"This is the best story I've seen. Congrats! I'm glad you got the sausage. Now give someone else that gift," another wrote.