This Is Why Roosevelt Is On The Dime

Have you ever wondered why Roosevelt is on the dime? It all goes back to polio and a beloved comedian. 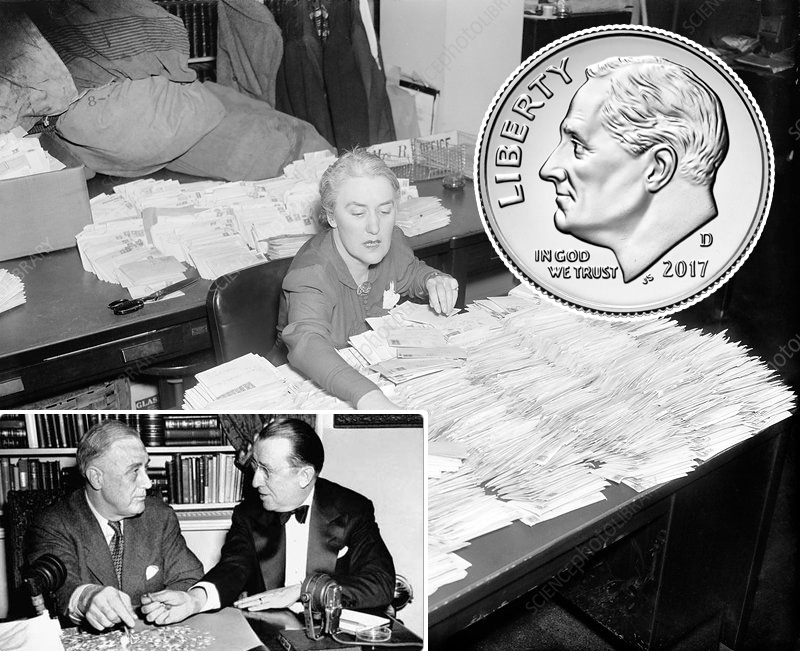 In 1921, President Franklin Delano Roosevelt contracted polio at the age of 39. He was never able to walk again on his own after contracting the disease.

When President Franklin D. Roosevelt started a foundation to fight polio, Comedian Eddie Cantor (1892-1964) came up with an idea to raise money.

Cantor was a multi-talented performer whose rise to fame began in the New York City theatrical revue in 1917.

After FDR issued his proclamation announcing the creation of the National Foundation for Infantile Paralysis to carry on the battle against polio, Cantor asked people to mail a dime to the White House.

"Nearly everyone can send in a dime, or several dimes," Cantor said in his Jan. 1938 appeal for donations. "However, it takes only ten dimes to make a dollar and if a million people send only one dime, the total will be $100,000."

Cantor called it the "March of Dimes", based on a pun on The March of Time, an American newsreel series sponsored by Time Inc. and shown in movie theaters from 1935 to 1951.

The White House was soon overwhelmed with a total of 2,680,000 dimes. Literally truck loads of dimes, mostly from children.

President Roosevelt went on the air to express his thanks:

"During the past few days bags of mail have been coming, literally by the truck load, to the White House. Yesterday between forty and fifty thousand letters came to the mail room of the White House. Today an even greater number – how many I cannot tell you, for we can only estimate the actual count by counting the mail bags. In all the envelopes are dimes and quarters and even dollar bills – gifts from grownups and children – mostly from children who want to help other children to get well. Literally, by the countless thousands, they are pouring in, and I have figured that if the White House Staff and I were to work on nothing else for two or three months to come we could not possibly thank the donors. Therefore… I must take this opportunity…to thank all who have aided and cooperated in the splendid work we are doing."

The money raised went directly to the research that enabled Jonas Salk and Albert Sabin to develop their polio vaccines.

After the death of President Franklin D. Roosevelt in 1945, legislation was introduced by Virginia Congressman Ralph H. Daughton that called for the replacement of the Mercury dime with one bearing Roosevelt's image.

The dime was released to the public on January 30, 1946, which would have been Roosevelt's 64th birthday.