When This Island's Penguin Population Dropped From 2,000 To 4, They Sent Dogs In To Protect Them

On a small island near the Victorian coastal town of Warrnambool, livestock guardian dogs are hard at work protecting Little Penguins, the smallest of the penguin species. 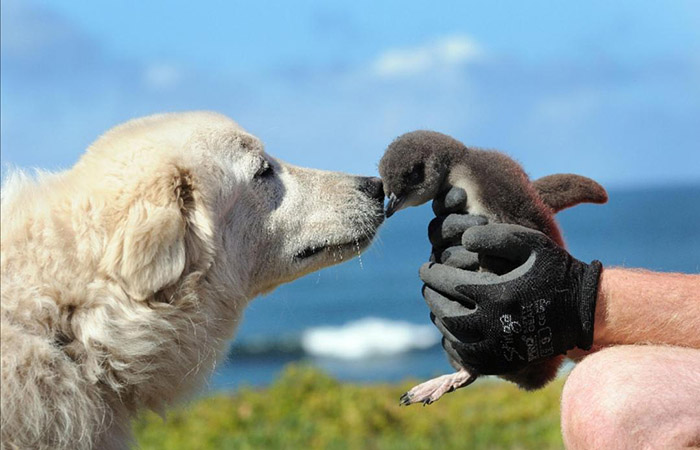 Maremma being introduced to a penguin

Middle island is a dangerous place for little penguins. 30 years ago, it was home to thousands of penguins, but by the late 90's that number had halved and by 2005 there was only four birds left.

At low tide, Middle Island becomes accessible to an introduced species, the European red fox, with disastrous consequences. The foxes wreaked havoc on the island.

So, Allan Marsh, a local chicken farmer, suggested that Maremma sheep dogs could be used to protect the penguins.

"The whole idea was taking an off-the-wall type farming practice of having Maremmas protecting your livestock and transposing it here on an island where there was a penguin colony that was being constantly marauded by foxes," Marsh said.

Maremmas have been protecting herd animals for centuries. Unlike most herding breeds, Maremmas do not confront livestock but integrate with them, forming social bonds.

The Warrnambool City Council approved the idea and Marsh camped on the island with his Maremma, Oddball, for the first week during the month-long trial.

The trial was a huge success.

"It did exactly what I hoped it would do," said Marsh. "The presence of the dog kept foxes from going onto the island."

The project has been running ever since and the penguin population on the island continues to climb.

It is now estimated 180 Little Penguins are returning to Middle Island each breeding season.

"When the dogs have been on the island, there has been no foxes on the island. So we know the dogs work. It's fantastic," says Trish Corbett of the Middle Island Penguin Project.