A Michigan father wants people to know "there are still real-life superheroes in this world" after a police officer's random act of kindness recently brought him to tears.

LaVonte Dell told ABC News today he was driving in Westland, Michigan, this past Monday afternoon when he "suddenly saw the red and blue lights" behind car. The 28-year-old dad said his "heart dropped to his stomach" and that he was "so sure" he was going to get a costly ticket because of his vehicle's tinted windows.

But what happened next "completely surprised me," Dell said.

"The officer told me why he pulled me over, which I had predicted, and then he also noticed my 3-year-old in the back wasn't in a car seat," Dell said. "He asked me to step out of my vehicle to talk to him, and I was just so scared thinking this couldn't be good."

But rather than issuing him a ticket, Dell said the cop -- whom he later learned was Officer Joshua Scaglione with the City of Westland Police Department -- took the time to listen to his story and then made "a generous offer."

"The dad teared up a little and explained how he didn't have the money to afford a car seat right now and that he had been running into some tough times," Scaglione told ABC News today. "So I said, 'Hey, could you follow me to Walmart?' and he was a little shocked and asked me, 'For what?' I told him I'd be more than happy to buy the car seat for him."

Dell said "he still couldn't believe it" when the two of them were shopping around in Walmart and getting to know each other better.

"He purchased one for me, and it was pink, which is my daughter's favorite color," Dell said. "It has butterflies and she loves it."

Though Dell didn't catch Scaglione's name or number before parting ways, he was reunited with the officer on Wednesday after his Facebook post about the incident went viral in the area.

Dell said he hopes that people who hear his story "learn to never judge a book by its cover" and "realize there are still good people out there going above and beyond to protect you and make sure you're still alright."

Scaglione said he was just doing his job and asks anyone uplifted by the story "to just pay it forward."

"You know, a ticket doesn't help all the time," the officer said. "I've been in a tough situation like this guy before. I figured it'd be better to help him out and just raise more awareness about car safety rather than give him a ticket that would dig him deeper in a hole and make things worse for him. 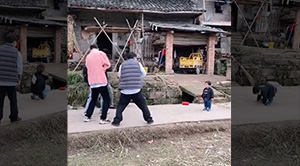