Waitress Who Had To Work On Christmas Day Receives $1,000 Tip From Customer

A waitress in Sun Prairie, Wisconsin, had to work on Christmas Day.

A generous customer made working on the holiday worth her while. 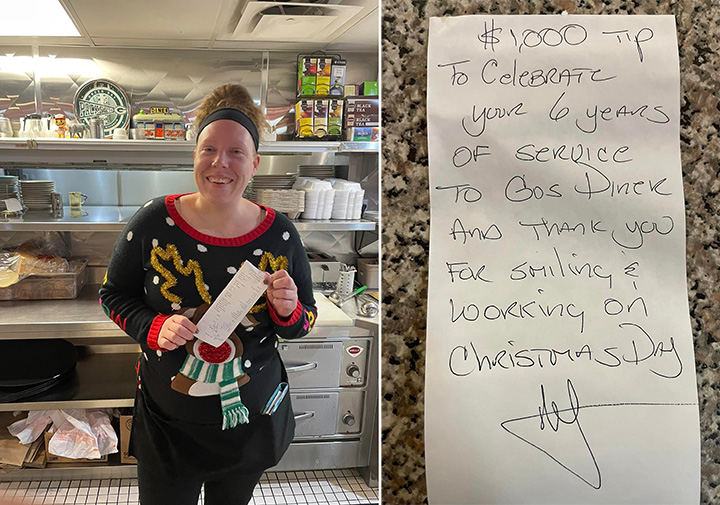 Callie Blue said she was woken up by a text message from he boss at about 4:50 a.m and was at Gus's Diner on Christmas morning by 5:30 a.m.

Her second guest of the day was Michael Johnson.

"Michael, I wanna say, walked in around six o'clock; he was really sweet, didn't have, just chit chatted with me, got some new things, and before he left, he tipped me $1,000," Blue said.

It was the biggest tip she's ever received, topping the $100 tip she received last Christmas.

Johnson, who is the President and CEO of the Boys & Girls Club of Dane County, was on a mission to give servers on Christmas life-changing tips.

"Merry Christmas Callie from Gus's Dinner in Sun Prairie. I learned Callie was trying to figure out how to cover her rent this week and our donors awarded her the biggest tip of her 6 year career at Gus Diner," Johnson said in a Facebook post.

"When I walked in at 6am this morning she was smiling, pleasant and seemed very happy to be at work. After I took the video she walked to the back of the restaurant surprised by the generosity. As I was walking out she asked to take a picture with me and said, 'I can't believe this is happening'."